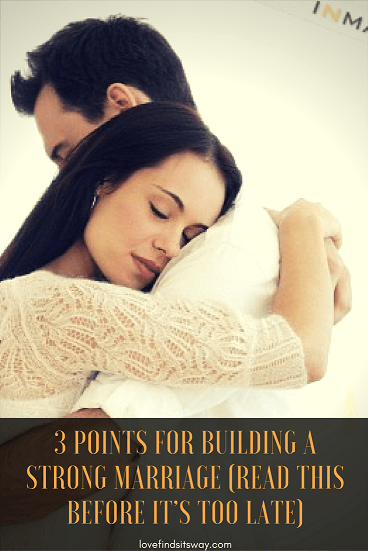 Marriage is GOD’s gift from heaven which most of the times we tend to neglect due to our personal ego, grudge and sometimes due to situations that are out of our control. But for building a strong marriage foundation you need to battle this things out.

Whatever your marriage situation is – In this post you’ll learn some common marriage problems that ruin it and you’ll also discover some powerful tips and techniques for building a strong marriage.

Now, I want you to think about your relationship as honestly as you can, putting aside any defensiveness you may be feeling.

Admit to yourself that you might have made mistakes.  Allow yourself to take some responsibility for the problems in your marriage.

Remember building a successful marriage is not easy, but I am asking you to be brutally honest with yourself and admit to yourself that you have some “warts”.

Everyone does, but few are willing to admit to themselves that they are not perfect.

It’s human nature to want to blame things on other people.  It’s much easier to live with ourselves when we feel superior rather than responsible.

Here’s the part that will make this exercise easier for you.  You don’t need to share your findings with anyone.

You simply need to admit to yourself that there’s something you do – something you say or a way you act – that is harmful to your relationship and you need to find that to work on your marriage for building a strong and healthy marriage foundation again.

You need to find and admit to this “nugget” in order to have something to work on.

I would love to share with you an amazing example here to illustrate better what I want to convey.

Karen wants her husband, Joe, to be more adventurous and fun like their friends are.  When they’re with other couples, Karen compares Joe to the other men and finds him lacking.

She criticizes him in front of their friends and Joe responds by withdrawing from her for a few days.

In a perfect world Karen would never criticize Joe, especially in front of other people.  But she does, and she doesn’t realize how much it hurts him.

Ideally, Joe should talk to her calmly about it at a time when things are comfortable between them, but he doesn’t.

It’s therefore up to Karen to figure out what’s going on, which is going to require her to be brutally honest with herself and admit that she is the one causing the problem.

She needs to admit to herself that the problem is not that Joe is boring or moody or withdrawn.  The problem is that she hurts him and causes him embarrassment when she’s critical of him in front of other people.

IMMEDIATE IMPACT ACTION: SORT THE WHEAT FROM THE CHAFF

I am not telling that the above example clearly resonates with your marriage situation.

But something is wrong for sure and that’s the reason your marriage is falling apart.

That’s the reason t’s time for you to start thinking if you wish to strengthen your marriage again.

The first thing that you need to do is accept your marriage situation the way it is – GOOD or BAD.

Doing this will help you to calm down unwanted grudge, anger and resentment that you may have for your spouse.

Remember this step is key if you wish to have a strong marriage and have better relationship and communication with your partner in near future.

Now, find a quiet time and place and grab a pen and paper to write some notes and lists of things you’re thinking about.

Start by thinking about your relationship from your own point of view.

Decide how many of them are really important.  Cross off the ones that aren’t important.

Can you live with him not putting the top back on the toothpaste?  Is it really a deal breaker that his/her table manners aren’t perfect?

After you’ve crossed off the minor items, combine the remaining items into one list, again in order of importance.

Now you are left with a list of the biggest problem areas in your marriage, from your point of view.

You have also reminded yourself of the things that are good about your partner and your marriage.

Put those lists aside for now, because you’re not finished yet.  Remember, the family systems theory shows us that no one person is ever totally at fault –you both play a part in the dynamics of the relationship.

Your actions affect him just as his affect you.

Now you need to look at your marriage from your spouse’s point of view.

If it will make it easier for you, visualize your partner talking openly and honestly to his / her best friend about you and your marriage.

Remember, no sugar coating to save your own feelings – be honest with yourself!  Again, make lists of the answers you come up with.

What would your partner say they like about you?

What would your partner say they don’t like about you?

What would they say is good about your relationship?

What would they say is bad about your relationship?

Review these lists, and think about them and your gut reaction.  Are you being brutally honest?

Are you feeling defensive?  Are you reacting with “yeah, but…”?  If so, you need to try again – there are no “buts” allowed here.

This exercise will build trust and love again in your marriage.

But remember they will only work if you are completely honest and willing to see and accept the real problem.

Remember, you don’t need to be right, you need to do the right thing.  You won’t be able to do it if you don’t allow yourself to see it.

Take comfort in the positive lists of things your partner likes about you and your relationship, and put those lists aside.

Looking at the two negative lists, consider the following questions as truthfully as possible.

Is my partner justified in not liking those things about me?

Is she/he correct about the bad parts of our marriage?

What was my part in creating these things that my partner doesn’t like?  Make a list of your answers.

What was your part in creating these things you don’t like?  Make a list of your answers.

Now you have two lists of things you have done to create some of the problem areas in your marriage.  They may be similar, or one may be much longer than the other.

Feel free to combine them and / or prioritize them.  The important point is that you have them, because they are a list of behaviors that you might be able to change to improve your marriage.

Let’s go back to the example of Karen and Joe to see how this can work.

On Karen’s initial list of things she doesn’t like about Joe, she wrote that he is not adventurous enough, and is sometimes moody and withdrawn.

While writing her lists from Joe’s point of view, Karen admitted that Joe doesn’t like her harping about being more adventurous.

In considering her role in it, she initially thought she could just calm down the harping.  She knows that Joe isn’t going to change and she should just accept that he will never be adventurous.

If Karen had stopped there, she would have helped to improve their relationship by backing off on the complaining.

But Karen didn’t stop there!

When she went back to her own lists and thought hard and honestly about the times when Joe became moody and withdrawn, she realized that there was a connection between his moods and her harping.

When she stepped away from her own self-interest and replayed in her head the most recent time she harped at him, Karen saw clearly what she had done!

In her mind’s eye she could hear herself demeaning him in front of friends and the sudden hush that fell over the room, and she could see the pained look on Joe’s face.

She realized what a terrible and disloyal thing she had done to Joe, and resolved to apologize to him as soon as possible and never do it again.

I use the Karen and Joe example to illustrate the power of letting go of your own needs and allowing yourself to see yourself and your actions from another person’s viewpoint which I believe is key to building a strong marriage foundation.

Karen’s “revelation” was fairly extreme because she’d been so oblivious to the effects of her behavior.

Fortunately, most of us have a greater concept of our harmful behaviors; we just need to allow ourselves to acknowledge them.

Note that this is just one part of your married life problems and there can be many. But the only thing is if you want to have aa strong marriage, you’ll will have to understand your spouse and their feelings.

I can only cover this much in this post. There’s a lot to write.

But before I stop. I would love to convey you a system that can transform your married life and help you to build a strong marriage foundation and long-lasting happy relationship.

If you wish you can Watch This Video Below and decide you need this or not.

Bye for now. If you loved this article on 3 points to building a strong marriage. Please do not forget to share it on your favorite social media.

God bless and Have my best wishes.

3 Hallmarks To a Happy Marriage (Every Couple Should Know)

Previous Post How to Communicate Better With Your Spouse – (I Urge You To Read This) Next Post Are You Aware of Your Roles and Responsibilities in Your Marriage?