Why Guys Are So Insecure? The Crushing Insecurity That He Lives With 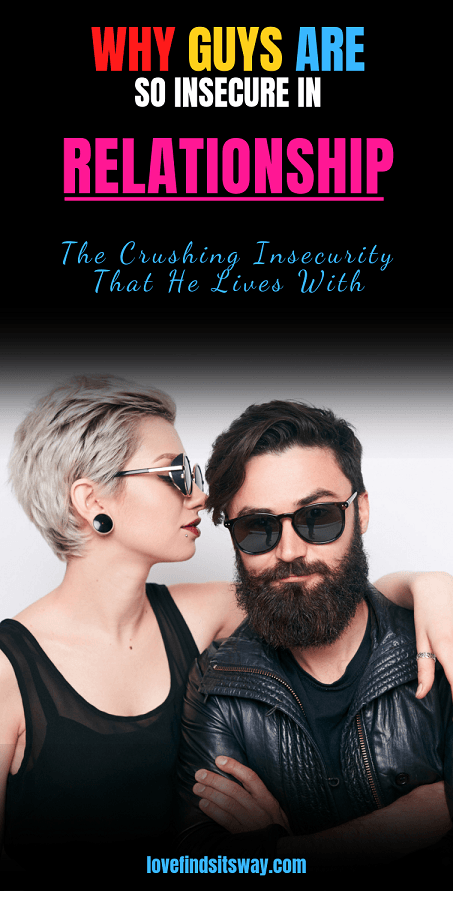 Why guys are so insecure? Discover here the Crushing Insecurity That He Lives With Every Day (But That He’ll Never, EVER Tell You About)

One of the main reasons is that, unlike women, men’s insecurities aren’t really talked about. For you, you have your insecurities reflected back to you at every turn.

From advice columns to chick flicks to mini-plots of beauty product commercials, there are about a million things you can look at and say, “Yeah, I know that feeling.”

I am not saying that is healthy in every case, but a lifetime of knowing that you are not the only one on the planet with a particular insecurity is a huge, HUGE comfort. It goes a long way towards helping you get over those insecurities.

Read More On: Signs He Wants to Commit But is Scared – (Discover Reasons Here)

Men don’t have that outlet. And that's why they are so insecure. Sure, men’s magazines have advice columns; and goodness knows, there are enough men in movies and TV shows.

But whereas our theme has always been to commiserate in the ways we are insecure, for men, it is about emulating the coolest among them.

And in doing so, that means suppressing their insecurities when they should be expressing them.

So deep down, they think they maybe they are in fact the only person with their particular insecurity. You can imagine what kind of tailspin that would trigger!

It could be that he wants to be more fashionable, but is afraid he will get made fun of by his buddies, or mistaken for being gay. Maybe he is clumsy, or lacks physical strength.

It is also cultural; he may feel embarrassed that he likes a certain song or movie. Or that he cried during a scene in a film. Or that he loves to chat over coffee.

In some social circles, he may be ashamed that he has no desire to join the military. In others, maybe it is because he lacks the artistic creativity that so many of his friends have.

And it’s not like he can ask a friend, or admit that he’d like help with some aspect of his life. With our friends, we can talk about all manner of embarrassing things, and ask for help, and just flat-out admit or failures.

But even in private, when it’s just a couple of guys, they still feel weird talking about feelings or insecurities or anything that would take them down a notch in someone else’s eyes.

If a man thinks that by telling a friend – even a best friend, or his brother, or his dad – something that makes him seem vulnerable, he is terrified that he will lose some measure of respect in that other man’s eyes.

Read More on: 19 Questions Why Men Lose Interest – And How to Fix It.

Basically, women are expected to have insecurities, so you can feel free to own up to them, and thus get rid of them.

Men are not expected to be vulnerable; they’ve been told their whole lives to “suck it up,” and “be a man,” and so they keep everything that makes them insecure bottled up inside.

Even a kid could tell you that that’s probably not a good idea.

But, this does go some way towards explaining why men seem to have such huge egos. And here this whole time, you thought he was just being some kind of proud peacock!

Nope. Instead, he feels the need to portray that much more confidence, even if he is not feeling it – just so that, not even for a moment, his insecurities do not show through.

It’s the straight guy’s equivalent to those closeted gay men who are huge homophobes. Or, to paraphrase Shakespeare: “The gentleman doth protest too much, methinks.”

It’s all very sad for our poor guys. But, there’s a silver lining – for you!

You can use this knowledge about his insecurities to get what you want.

Now, don’t worry. This strategy has nothing to do with feeding those insecurities. Your guy has honed that to a fine art, all on his own. He needs to no help in that respect.

In fact, if you do play on his insecurities, then you are pulling a power play that is disrespectful and, if I may be so bold as to say so, despicable. Don’t give into that temptation, ever.

Instead, you want to do everything you can to give him a comfortable space in which he can be as much himself as he dares to be.

In effect, you want to become his safe haven; the one person who he knows is not going to be one of his 10,000 judges he has in his head all the time.

Once again, in a way this all leads back to respect. If you show him in as many ways as you can that you respect him – consistently, sincerely, proudly - then he is yours forever.

So, let him know! Celebrate those wins. Be his cheerleader. Let him know that you have every confidence in his ability to succeed at whatever he sets out to do. He is your very own superhero!

He will literally worship the ground you walk on.

It’s also about not busting on him – something we touched on a bit when we talked about not treating him like a boy, and about staying positive.

Every time you cut him down a notch, he takes himself down another 10 notches. Do you really want to contribute to his insecurities?

I sure hope not – because it is a surefire way to make him back away from you, or even shut down completely.

This can be accomplished even in small, subtle ways. Take fashion, for example. Now, we all know that your average guy doesn’t look like he stepped out of the pages of GQ. And trust me, he knows it too.

But time and again, when we see our guy preparing to leave the house, we can’t resist making a few edits to his look.

And sometimes we just outright let him know that he really shouldn’t be leaving the house looking like that.

The next time this happens, don’t go for the negative – make it into a positive.

“Hey, look at the hottie! I love those jeans on you. Ooh, you know what, try it with that new shirt you got the other day. I want even more reason to jump you right now.”

You get the idea. It’s all about framing it so that you are avoiding putting him down. This can be used for small and large things.

So, how does this help you get what you want? Well, like I said – he will love you forever and worship the ground you walk on if he knows he can depend on you to make him feel more secure about himself.

I will stop here. But before I leave I would love to RECOMMEND you something amazingly special that will help you to understand your man, his insecurities and have a life beautiful relationship.

Well my friend men changing their minds and losing interest is crazy common.

And many women wrongly think after losing their guy that he simply wasn’t the right guy...

Or that he simply didn’t deserve you.

But the EMBARRASSINGLY truth is

I recently stumbled upon a scientifically proven method called ‘emotional flooding’ that allows you to ‘flood’ his mind with the strong, almost COMPULSIVE feelings of attraction and desire

In fact, when you apply this method the right way… you can keep him completely in love, attracted, and committed heart and soul to YOU for as long as you want him.