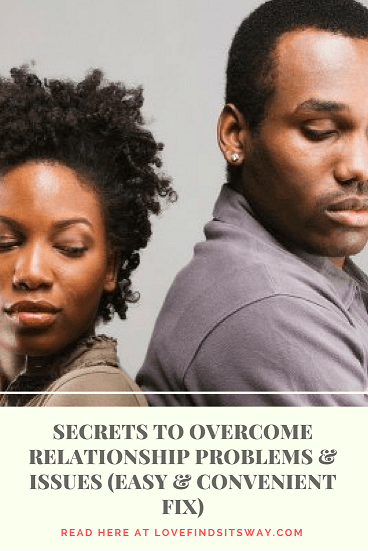 Arguments, disagreements, nit picking, nagging, and not always seeing eye to eye— these are some relationship problems and issues certainly not the pleasant parts of your love life!

The reality is that every relationship has some aspects of this and therefore must find a way of balancing difference of opinions and various personalities. It’s not always easy, but it’s a fact of life that relationship problems are a part of life that cannot be ignored.

But can certainly be fixed if both the partners are willing to.

You are not going to have a relationship where you don’t argue—if you do then somebody is not saying something.

Every couple will have their sources of arguments and have a tendency to get on each other’s nerves.

It’s what you do with that and how you learn to handle it that makes the huge difference in solving relationship problems.

Common relationship issues are not what we like to think about, but everybody has to deal with them.

These are at the core of men’s worries about commitment though and therefore staying ahead of them is crucial for long term success.

Men take the relationship issues like nagging and arguing personally, and therefore worry about this in the future.

Nagging can not only really deteriorate the relationship over time, but it can make you feel more like his mother than his lover.

Be very careful about this and try not to be a nag! Instead understand what he wants from you.

Same goes for him as men can nag too, and you may need to make him aware when you feel that he’s acting this way.

What you need to do is minimize how much you let these issues overtake the relationship.

Do recognize that you are going to argue, but try to work through it with effective

It’s not always easy but it’s so worth it!

Find a healthy balance and work together to make the best of the most common relationship issues.

Working through the most common relationship problems can really pay off!

#1. Seeing How It Works In Real Life

I have some friends that I met a few years back that are what I would consider to be a pretty “solid couple”.

They have a lot of fun, are good parents, and seem to have the marriage and commitment thing figured out.

There is one area that I will never fully understand them though —the way that they argue with each other!

They are that couple that when you are out with them at night for dinner they will be just fine and talking to you and then BAM—the arguing begins!

First it starts with her talking to him like he’s an idiot and even giving him that condescending look.

Then it evolves into him getting irritated with her and you can feel the tension building.

It’s at this point in the interaction that I personally start to feel uncomfortable.

The tension is building and I want to leave the table, but that would be obvious and rude.

The argument inevitably erupts and so you as a bystander sit there and watch the whole thing—truthfully they are oblivious!

I’ve been there when the nagging and arguing has evolved into actual yelling and screaming.

Not good for anyone, particularly me as the friend who is stuck just sitting there!

Once they argue and get it all out, they literally snap back into normal within what seems like seconds.

For as many times as I’ve witnessed this,

I can’t believe my eyes! I am flabbergasted by this reaction and cycle because they seem to get over it quickly.

They act normal and may even be super affectionate with each other right after the exchange takes place. It’s absolutely bizarre!

Do I recommend this sort of exchange to any couple that I see?

Absolutely not, this is not the norm and really not a recommended behavior!

Somehow their passion allows them to overcome their disagreements, but it’s not a good pattern to follow at all.

Though this couple has figured out how to let the arguments work into their relationship, this is an extreme and certainly not one to model yourselves after!

Don't Miss: How to Fix a Broken Marriage (Even When One Partner Has Given Up)

#2. How Can You Turn This Negative Relationship Dynamic Work for You?

It’s not a good or positive part of the relationship, but arguing and disagreements are inevitable.

So how can you turn them into a positive?

Even the most positive person may feel as though this is an impossible task, but it can be done with the right focus—and by having both people on board!

So keep these things in mind and it just might save your relationship/marriage, and help to keep you sane in the process. Don’t be like that crazy couple that I know!

Know that some level of arguing is normal: Everybody argues and disagrees from time to time, so know that going in.

If you hear of a couple that doesn’t argue then somebody is not saying something and that’s not healthy either.

When you are close to somebody and spend so much time with them, it’s only natural that you are not always going to see eye to eye.

Accept this and know that a little arguing is normal and may even be healthy!

The key is to solving relationship problems and issues is by keeping the arguments to a minimum and do your part to not let them get the best of you as a couple.

This isn’t always easy but a proactive approach can really keep the committed relationship intact.

Accept that you are going to argue, recognize that it doesn’t need to take over or become a dark cloud, and then get to the heart of the issue.

Some arguments can be prevented while others are inevitable based on personality or point of view.

Do your part to stay calm and never let them become bigger than they are.

Trying not to let the mundane everyday nit picking overtake you: Everybody has the tendency to nag sometimes.

Along the same lines, everybody has it in them to get into a rut and the mundane can really overtake you if you allow it to.

The couples that you see allowing the everyday ruts and nit picking overtake them are the ones who may not have true staying power.

Relationships can be wonderful, but that requires effort.

So the same holds true for the fact that nagging or getting on each other’s nerves can really cause problems down the line.

It takes a concerted effort on both parts not to get into that rut and to pull yourself out if you do.

When everything that the other person says begins to annoy you, then it’s time to take a step back.

Gain perspective about what’s going on and causing the nit picking or general disagreements and then do your part to fix it.

Stay strong and know that with the right amount of focus, you can ensure that those annoying little things and nagging don’t rule your days.

Take a step back and recognize when you are nagging—and stop it! We all know when we are nagging if we’re really honest with ourselves.

So do your best to avoid it and to be aware of it so that you can try to catch it midstream.

Though you may feel that you are justified in what you think or feel, more than likely nagging is not the way to get your point across. Pick your battles!

Never let the disagreements get the best of you and never let nagging become the norm.

Don’t get nasty with each other and always treat each other with respect.

If you can keep these things in mind, keep the arguments to a minimum to solve your relationship issues, learn to really pick your battles, and really utilize effective communication then you can stay strong and emotionally connected as a couple.

Nagging never works, nor does name calling or treating each other without respect.

If you can find a way to stay calm, avoid picking on each other, and communicate when something is really amiss, then you can make the most out of the everyday arguing that is bound to take place.

It’s always easier in theory than in practice, but working at this is what makes a relationship and commitment work well for both of you!

I will stop here. If you loved reading this article on common relationship problems and issues, please do not forget to share it on your favorite social media.

My name is Manish Yadav and I’m the owner of the blog "Love Finds its Way". My advice does away with the manipulations and mind games recommended by magazines and the surface level advice of TV gurus… We’ll dive DEEP into the psychology and biology of desire and give you actionable steps you can use today. Over 900,000 men & women have transformed their relationships as a result, and I've been featured in Lifehack, Return of Kings, Menimprovement, Urban Dater, and so on......and no... We're not here to play games so you can manipulate your significant other......My only intention is to help you and your partner have a healthy and loving relationship by working on your intimacy with each other.And we’re just getting started!