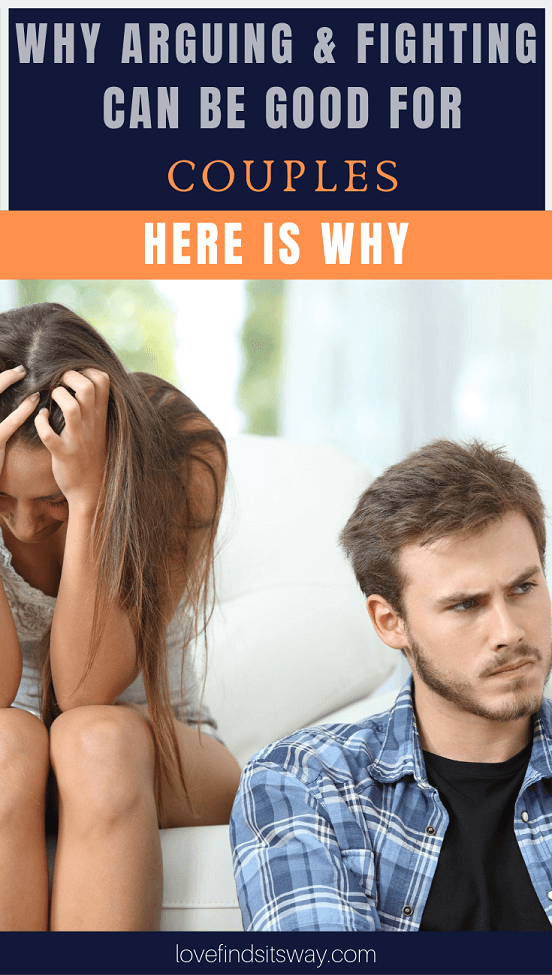 You see a lot of times, people get into a fight, and they fight so often [that they] end the relationship, [because] they just automatically think that they’re in the wrong relationship.

Is that necessarily the case, or is fighting okay between couples?

Here are some good and bad points that prove fighting can be good for couples if done in a particular manner.

This is something that I wish I would have learned ten years ago!

About two years ago, one of my friend invited to a conference (Amway conference I believe most of you know about Amway) where they invited this lovely counselor [to speak].

He gave us a very simple model of relationships; it’s much simpler than mine and it apply to all couples, but too good for fighting couples.

He said, “You fall in love, everything is perfect, and then chaos hits.

Chaos will always hit sooner or later; you just can’t help it.

Then you have to make a decision: do you stay or do you go?”

The point is: chaos is going to hit no matter what at every stage of your relationship.

You can postpone it. You can stay in the “falling in love” stage, experts estimate, for up to two years.

So you can deny reality for up to two years; it’s pretty easy, especially if you don’t see your partner that much.

So, ultimately it boils down to one thing how to stop fighting as a couple and create a happy ending?

But at some point, things aren’t [going to be okay]. And you may wonder thinking . . . Am I really happy with him?

The two of you are not the same person. You are not actually twins. [We often think,] “Everybody thinks like me,” or, “This is just common sense. How could someone think differently?”

But your partner actually probably does think differently to you, and they think, “[But my view] is plain common sense.”

You have your differences, and, because we’re different people, we fight as a couple– period!

That’s it, really. The only way you can avoid fighting is to pretend that you’re not different people, and to pretend you agree with everything your partner says.

You may be willing to do that, but that’s going to take a toll, and it’s actually not going to create a very great and successful long-term relationship.

So, if you have the courage to express who you are and express your beliefs and express what you think and feel, you are going to get into a fight.

We’ve got another word that’s “argument,” and “argument” is also kind of ugly.

But then we have this other word, which I like better, and that word is “disagreement.”, Yes disagreement the perfect substitute for the word "fight".

Instead of having fights, why don’t you guys just disagree?

There are different kinds of disagreements and doubts in a relationship.

There’s “good” disagreement, and that’s the kind where you and your partner don’t agree and you’ve talked about it, you’ve got things out in the open, you’re not terribly happy about what each other thinks, but you’ve heard each other and you understand where each other is coming from.

You think, “Well, maybe we haven’t resolved much, but at least I know what he’s thinking, and he knows what you're thinking, and it’s out there in the open.” That’s good.

You should disagree like that all the time. I’m not saying it’s easy.

It’s really, really hard, especially when the disagreements are about [big topics like] sex or whether you have kids.

It’s going to be hard, but you’ve got to talk about it.

You can’t be afraid of [disagreeing].

But the problem most people get into is that they have “bad” disagreements, which is also called fighting or arguing.

That’s where you get really emotionally upset.

You say things to your partner that you really regret later.

You feel sick afterwards. You just don’t feel like you understand your partner, because you spent the whole time trying to prove to your partner that you’re right and they’re wrong and defending yourself. That’s bad.

If you’re doing that, you need to work on the way you argue.

They’ve done studies on this, and people who talk about how they argue actually have fewer arguments than people who just argue unconsciously.

So you really need to not be afraid of disagreeing with your partner.

But you’ve got to learn how to do it right, and it’s actually not that hard. I've covered some ideas on how to argue, disagree and stop fighting as a couple; it’s a skill like any other skill.

We watched our parent fight, or as a child we began to fight with our mother because we wanted to do one thing and she didn’t want us to do it; that’s how we learned our behavior.

So if you learned how to fight the way you fight, then you can change it – easy as pie!

Here are some simple but effective tips on how to fight well, and hopefully th​at’ll give you as a couple some guidelines.

I give you 3 tips just off the top of my head? Fighting is an art, and we should all learn it.

It’s a wonderful art, in fact, but it doesn’t mean we get our own way. That’s probably #1

#1: This Isn’t about Winning

The #1 thing that you and I and everyone listening out there needs to remember about a fight is: we’re not in it to win it.

This is not about proving that your partner is wrong. Okay?

It’s not. Sorry. The way I think of it – and I love this description, because I think it get you into a better mindset – is this…

The way most couple fight is: they see themselves as lawyers for opposing teams arguing their case in front of a judge.

That’s just the way it is. But there are a lot of assumptions made there.

When you’re in a fight, neither of you are thinking rationally, and both of you are focused on arguing.

So what I suggest couple do is see themselves as detectives.

You are detectives trying to solve a mystery, and the mystery is: how can we resolve this situation so that both of you are happy?

As detectives, your goal is to find out all the evidence.

Get all the “evidence” on the table so you can sift through it and see if you can make any connections.

As a detective, your goal is to “interview” your partner and say, “So tell me everything you can tell me about this situation.

And you listen really carefully to your partner, because there might be a clue in there.

Then your partner will say, “Okay, right.

How do you feel about the situation? What do you want out of this situation?

What’s happened that has made you feel the way you do?”

Once you’ve said everything, you say, “Okay, we’ve got everything out on the table.

Where to now?” and you try and find something that works for both of you to stop that unwanted fight.

And that would work for anyone. But you’ve got to give up winning your case. I’m sorry about that.

#2: No Blaming As Blaming Leads to More Fight and Unhealthy Arguments.

Definitely. And just remember some of the things that we talked about earlier. No blaming – period.

You cannot blame your partner for the way things are.

But sorry: you can’t blame your partner.

You’re both in it, and you’ve got to take responsibility for the way things are, too. So that’s off the table.

The other thing is, as I talked about before, you’ve got to talk to your partner with respect.

This means there are a lot of things that are off-limits.

Would you throw things at your boss? Mmm, probably not.

Would you yell at your boss? Well, not unless you want to get fired.

Would you tell your boss that he was stupid and didn’t know what he was doing and should just let you be the boss?

You could get fired! We treat our partners horribly.

It shocks me sometimes!

Most of us treat our partner worse than when we would treat a stranger off the street.

It’s just madness, but the thing is: we’re taught by culture that our partners are there as kind of our “punching bag.”

They’re the scapegoat for everything that goes wrong.

Anything goes wrong, if you’re having a bad day, blame it on your partner. It’s easy; it’s nice. It gets your moods out.

If you’re feeling bad, yell at your partner and you’ll feel better.

There’s a lot of this stuff in our society.

Especially if our parents did that, we’ll tend to do it to our partner. Don’t do it.

You will not treat your partner with disrespect. Period.

If you can remember those things, then you’ll actually do pretty well. Fights might actually feel a little bit more fun!

So follow the tips in this guide, to fight as a couple but in a healthy way and you can really find success in your disagreements and move through them to resolve them.

I will stop here. If you loved reading this guide on why fighting can be good for coupels, you'll also love this powerful presentation here.