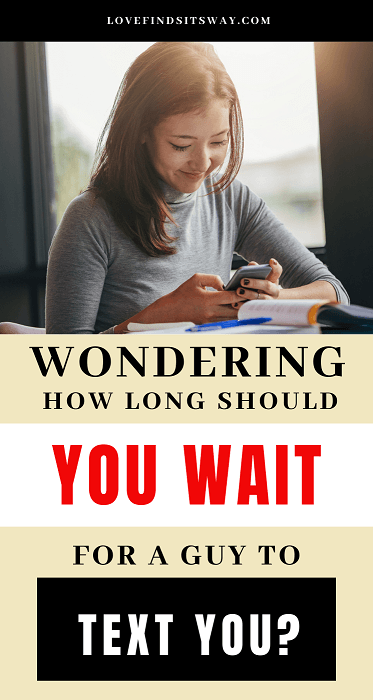 Want to find out how long should you wait for a guy to text you? Well, it's a question that many women have but very few know the exact answer to this question.

But do not worry, I will show you exactly how long should you wait for a guy to text you back.

There are two distinct divisions to discuss how long you should wait before texting a man: Sending him the initial text and responding to his text.

Picture this: It’s a Friday night and you’re out with your friends in a crowded bar.

From across the room you lock eyes with a handsome stranger. As the night carries on, you find your gaze darting around the room, looking for him.

Every time you find him with your eyes, you see him looking right back at you.

After a few more drinks, and a couple more glances for reassurance, he strolls over and introduces himself.

As the night slips into morning, the two of you laugh and exchange stories.

Despite the buzzing noise, you feel like the rest of the world has disappeared and it’s just the two of you standing there.

When it’s finally time to say goodnight and part ways, he gives you his number.

Beaming from ear to ear, you graciously accept it and agree to call him sometime.

Crawling into bed that night you feel a galaxy of butterflies flutter in your stomach as you think about how the night played out.

Falling asleep with a smile, you wake the next day, desperate to send him a text. But is it too soon?

When it comes to sending a potential love interest the first text, it can be daunting to determine whether or not enough time has passed before messaging him.

Since you don’t want to appear “desperate,” a good rule of thumb is to wait at least three hours before texting him.

This shows him that he’s on your mind, but that you’re also busy and have other things going on in your life.

In scenarios where this three-hour time slot falls past midnight, hold off on messaging him until morning—three hours after you wake up.

(Sending your initial text too late could easily give him the wrong impression.)

Just be sure that you do send a message his way within the first twenty-four hours of getting his number.

You don’t want to let too much time pass before messaging him for two reasons: first, to avoid the risk of him forgetting about you; second, to show him that you are in fact interested in him.

Since he’s given you his number you don’t have to worry about rejection, and instead you can focus on igniting a spark between the two of you.

As for what to say in your initial text message to him, stay tuned, that’s coming soon! 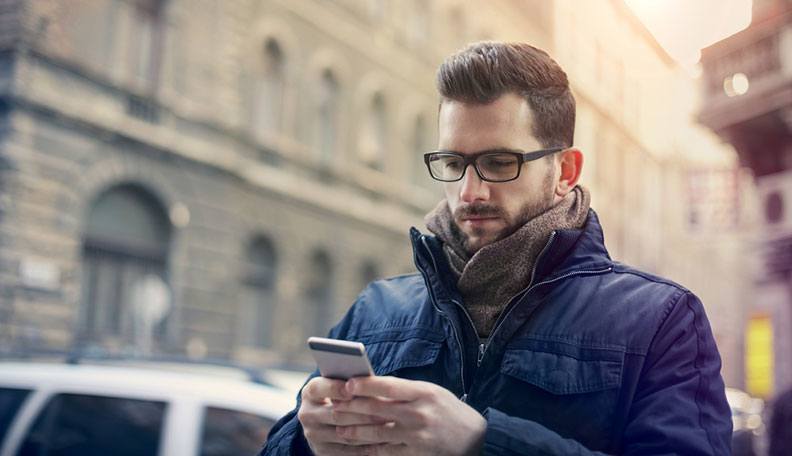 When He Texts You First.

In this case there are a few pointers to keep in mind when responding to him.

Let’s say you’re in the midst of your morning run and you feel your phone vibrate in your pocket.

Slowing your speed, you take a quick glimpse at the screen to see that it’s a text from Chris, the cute guy from the market.

As the smile spreads across your face, you bring yourself to a complete halt and read his message.

It was really nice chatting with you yesterday. I can’t wait to hear more about your thoughts on art. Would you like to meet me for a coffee this week?

Tempted to blast off a quick, “YES I WOULD LOVE TO!” you realize how desperate that would make you seem. or maybe not, if you don’t write in all caps . . . So, what should you do in this scenario?

First, let at least half an hour pass before replying.

This demonstrates to him that you’re not just sitting around waiting to hear from him; rather you’re busy with other things. We’ll get to what you should respond with shortly.

Once you’ve responded to his initial text, there’s no set period of time or magic number of minutes you should wait between texts.

However, here are some helpful tips that will help you build his attraction levels to you through texting

Mirroring his responses is a great way to set the momentum between the two of you.

If you send him a message and it takes him three hours to respond to you, then you may also want to wait a couple of hours before sending him a reply.

By the same token, if he gets back to you within ten minutes, then feel free to do the same. As long as you’re not replying to his messages the moment you read them then you’re doing just fine.

You will also want to avoid sending him multiple messages if he hasn’t replied to the first.

Think of your texting conversation like a game of tennis: any time you serve (a text), you should wait for him to return the ball (text again!) before sending another volley (yep, you got it).

If you’re doing the opposite and sending him multiple messages at a time then you’re going to come across as clingy, and perhaps even be labeled a pest.

By following the tennis rule you’ll be able to keep him interested, and also prevent yourself from over-sharing

On that note, you should beware in general of too much predate texting.

Yes, it can be great to get to know someone a little through texts first, but if you open up too much before you actually go on a date together then you risk exhausting easy topics of conversation for when it really matters (face to face!), and even putting out the flame before it has a chance to fully spark.

Even if your relationship seems to be going swimmingly, too much texting early on could leave you feeling you’ve said everything interesting you have to say to each other, even if you’re wrong—after all, conversation sparks conversation, but you need a solid place to start!

Lastly, it’s important that you read the signs. If you message the guy you’re into and you don’t hear back, wait a day or two before sending him another message.

If this message again goes without a response, give it another few days before firing off a third and final message.

If after that time you’re still hearing crickets, take the hint and realize he’s not into you.

This sounds harsh, I know, but it’s not right for you to waste your time on someone who doesn’t have the decency to be upfront of with you, and you shouldn’t disrespect yourself by trying with a guy who’s clearly not interested.

Remember, one unanswered text could mean he’s busy; two could be technical difficulties; but three means he’s blowing you off.

Before you leave I want to show you something.

Do you want lure that one special man (it could be your boyfriend or husband or your crush) he will feel so happy and lucky being with you, around you, beside you, and close to you and emotionally connect with you.