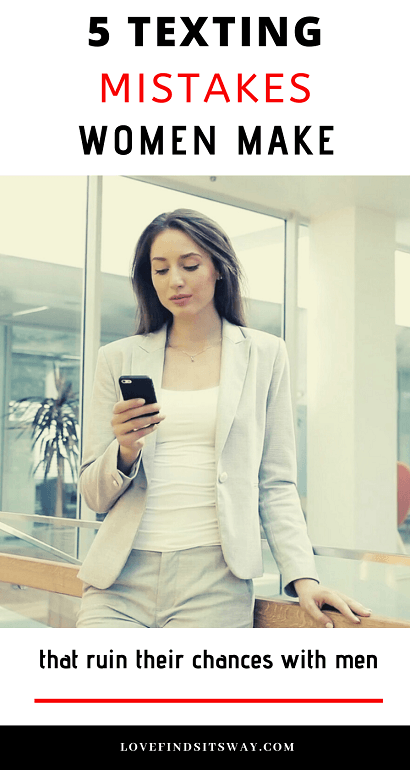 Want to know what are the many texting mistakes women make when trying entice the guy they like?

Before that let me ask you something?  how many times did your mother tell you not to touch the stove because it was hot, but you just had to see for yourself? Probably at least once.

Well, consider me your friend in this situation, and take from me the texting mistakes that you don’t want to test out for yourself.

Some of these texting mistakes women make are obvious ones, while others slip through the cracks and go unnoticed.

Still, there’s a reason why these texting mistakes make this list, so take note and avoid them if you really wish to fascinate the guy you like.

When you’re feeling smitten, it can be tough to keep your thoughts and feelings to yourself.

Unfortunately, this is something you’re going to need to master when it comes to texting the guy who’s got you lovesick.

Sending the dude you’re into a plethora of questions or rambling rants about whatever is on your mind is not only going to overwhelm him, but it’ll also make him less inclined to answer all of your questions, if he chooses to respond at all.

Hey, how is your day going? Did you remember to call your mom? I spent the morning in a really long, boring meeting. I’m so glad it’s finally over! What are you doing later? Have you heard about the new sushi joint on Government Street?

Guys don’t like being bombarded with questions or feeling interrogated through text messages.

Nor do they want to spend their free time typing on their phones. Sure, this may be how you and your bestie communicate, but with him, it’s better to take it slow and refrain from sending a paragraph of text.

Messaging him too much too soon, or coming across as needy, isn’t going to be a good look. Instead, make sure there’s a purpose behind any text you’re sending him.

These are three prime examples of passive-aggressive text messages that get sent far too often.

Since there’s no denying that these texts are laced with negativity, blasting off such bitter texts won’t help you win over any man.

Sure, you might be irritated by something he has said or done, but by reacting hostilely you’ll not only make him feel uncomfortable, but also confused.

Instead of hiding your frustrations or disguising them with snarky remarks, be upfront about them . . . just not through texts.

To really get the message across, take a break from the texting so he has time to consider whether you’re feeling displeased, and why that might be.

This will also allow you to take some time to cool down before discussing the issue face to face.

Because no matter how justified you feel your reasoning for passive-aggressive texts is, there’s still a solid chance that your guy won’t be able to decipher what it is you’re really saying, and if he does, you still risk coming across as petty and immature.

No man likes to be belittled, criticized, or yelled at, especially by the woman he’s interested in.

Just as you shouldn’t take it from him, don’t dole it out, especially via text—that stuff sticks around after a fight, and can be used as evidence of your crazy long after the fact.

This means that no matter how angry you may be with your guy, you should never text him nasty or offensive messages.

One of the biggest relationship killers is complacency, especially if it sneaks into the picture early on in a relationship.

If you get into a texting habit where you send the same lazy texts, or text so much that they replace real communication and connection, you could be sending your relationship spiraling into ruin before it’s truly begun.

To avoid making this mistake, it’s important that you put in an extra bit of effort so that your text messages don’t become repetitive or predictable.

Why? Because if the guy you’re texting knows what your message is going to say before he even opens it then he’s not going to be excited to hear from you.

Some popular examples of predictable texting mistakes include “Hey,” “right on,” “sounds good,” “LOL,” and “HAHA”.

That’s not to say you can never use these texts, but you should watch what you write and avoid just mindlessly messaging him.

If he gets the impression that you’re messaging out of boredom then he’s not going to want to keep a conversation running.

You – you want to order pizza tonight, or go out for dinner?

Uhhh . . . okay? When texting a guy you’re into it’s important that you send him messages that make sense.

If he has to guess what you’re trying to communicate or feels like you’re messaging him is half-assed then he may get the impression that you’re not that into him.

Just like you’d be annoyed or disappointed if his texts made no sense, he also doesn’t want to be on the receiving end of nonsensical messages.

It can be tough to silence the green-eyed monster when it comes calling, but if you start sending the guy you’re into messages laced with jealousy or that show how insecure you are, then he’s probably going to make a run for it, and who can blame him.

The same goes for texting inappropriate questions, such as those about previous relationships, present finances, religious beliefs, and so on.

Sure, dishing personal details will come with time, but they’re not things to share outside of face-to-face interaction.

Texting him questions that touch on sensitive topics is simply not a smart move.

And it’s kinda weird. Again, keep your messages positive and light. The key is to make him want to hear from you, not to cringe in anxiety when it comes time to respond.

So what does the perfect text message entail? It’s something that I’ll cover in my next blog post and I believe you enjoyed reading this short guide on texting mistakes women make.

If you want to learn more on sexting I’ll recommend you to read my step-by-step guide where I have covered a lot about sexting ideas.

How Texting Has Changed Online Dating And Relationships