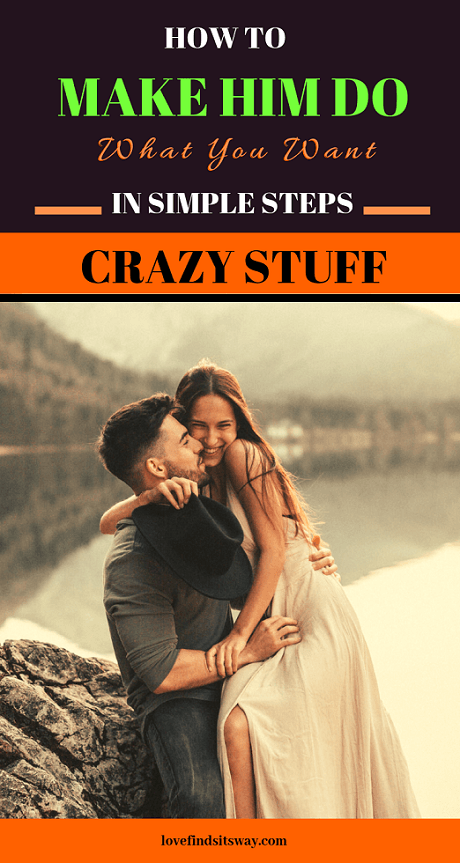 Seriously .. do you want your guy to do nearly anything you want him to? Just keep reading this guide not only to make him do anything that you want but also see you as the best future prospect for marriage

You're gonna love this! This is a sentence structuring method. And the beautiful thing? Once you get used to doing it, you'll use it all the time.

It will become completely natural to you. You won't even have to think about it.

So here's the premise. Don't you sometimes hate asking your guy to do something for you?

He finds a million excuses not to do it right?

Well, the reason you're not getting your way is all in the way you ask him.

This is not bribing. Bribing is unromantic and dry. This is How to do it:

What you do is whenever you ask anything of him, instead of just asking, you'll seed in a "justification suggestion"

A justification suggestion is a logical and emotional attachment and beneficial phrase that makes the thing you want him to do a no-brainier.

An example, imagine if you want your boyfriend to call you more often.

Most women would say, Example 1

-"Hey baby, you should call me more often in the mornings"

-or "baby please call me more in the morning, I like to hear you."

And although these 2 examples may work, what's in it for him?

What’s the real benefit of him to waking up at 6 a.m. calling you every morning?

That's where the justification phrase comes it.

Here's the new example with the justification phrase bolded in red...

-"Babe, I love the sound of your voice in the morning,

-it makes me excited for the rest of my day

-and so raspy and deep it makes me wet,

-you should call me every morning if you can"

See the difference? Instead of making a demand like the first example, the second example gives your boyfriend a logical AND emotional benefit to call you.

Now, it totally makes sense in his mind to call you.

Because knowing you get wet hearing his voice instantly triggers every hormone in his body, knowing he has sexual power over you.

You say: "Take out the trash babe" He gives you that annoyed look, and says "alright" Sure he'll do it, but he resents it because you sound like his mom!

Remember there is a way when it comes to learning how to make him do what you want and you need to master that way to reveal the alpha male in your man.

In the above example- The way you worded it is in "Me" language... nothing that really benefits him.

You: "Hey babe, we might be having company and last thing we need is to be known as that 'stinky house couple', could you take the trash out when you get a second?

My hands are full doing the dishes and laundry"

See what's going on here? You gave him a real logical reason why taking out the trash is important not only to you...but to him too!

You just tapped into his Power and Respect drives... because if people come over and smell the trash, he'll be known as a man who can't even keep his house in order, therefore lowering his status and power in the world.

Another thing, you may have noticed in the last 2 examples is I always gave him the option to do it.

Like in the first I said, "you should call me every morning if you can”..and in the last example I said "could you take out the trash when you get a second?"

Why did I do this? The FREEDOM DRIVE!!

Remember, your man is driven by freedom, he doesn't want to be told what to do and this is crucial when it comes to learning how to make him do what you want?

So simply "softening" your demand like this will make your persuasion stronger.

All these little things add up into you having your guy on a leash like a dog!

He'll simply do what you want because you're feeding him the reasons he needs.

Let me show you how powerful this method is using a totally different scenario.

Langer performed a 2 part experiment on people waiting in line to use a printer at a library.

The whole goal was to see the power of adding a justification phrase.

Experiment 1: Langer walked up to random people in line waiting to use the printer and asked, "Excuse me, I have 5 pages.

Get in the back of the line like everyone else!"

Experiment 2: Langer repeated the same steps as part 1, but this time she attached a justification phrase behind her need to use the printer.

Nearly all of the people she asked would let her cut in line just because she added a simple justification phrase to her command!

Crazy thing about this experiment?

In experiment 2, Langer didn't even give the person in line a reason that would benefit them.

She simply said, “because I'm in a rush”.

So here's the overall key to this method:

Before you ask anything of a man, come up with a logical and emotional justification phrase that benefits him.

And remember, a benefit that taps into one his big 3 drives, to have more Freedom, Power or Respect.

And he won't be able to help but do what you want him to do.

Extra Tips to Make Any One Do What You Want: -You can use this not only with your man, but ANYONE! Use it at work, with your kids, anyone. -Don't feel like waiting in line at the DMV? Try this method!

I will stop here. I hope you loved reading this short guide on how to make him do what you want?

But before you go if you really loved reading the simple but effective tips in this guide I request you to watch this amazing video below.

Previous Post Does He Sees a Future With You? If Not This Guide Will Help You Next Post The Feminine Qualities in a Woman That Men Cannot Resist