Does He Sees a Future With You? If Not This Guide Will Help You in life 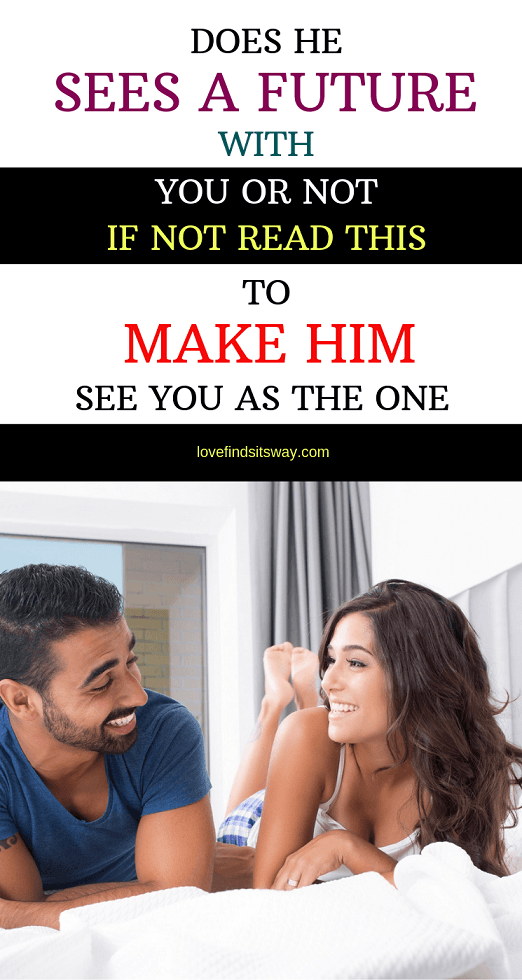 Does he sees a future with me or he talks about the future with you? These are serious questions running in your mind that makes you think what he wants from you, isn’t it?

To be honest, every woman sees a future with her boyfriend.. I know that?

Does he really see you by his side? If you feel, “I don’t know… but I hope so, I really really hope he see’s you in his picture.”

Whatever your situation is this amazing guide is for YOU.

Would you like to know he does see you in his future?

A method so potent…he won’t have a choice but to know you’re the only one he want’s to spend the rest of his life with? And he will show signs he wants you in his future.

Well you’re gonna this Method as this method will not only make him emotionally attached to you but it will also make him see his future with you.

This is a method I get tons of emails from women about.

Some tell me how huge of a positive impact it’s had on their relationships their man.

One woman told me her longtime boyfriend finally proposed after she did this!

So if you are still wondering does he sees a future with me or not just keep reading to get his signs of having a future together.

So what is it? You’re going to write a story! And not just any story. The story of your guy’s future with you covertly injected in it.

You’re going to tell the story of you and your guy together 5-10 years from now.

Here’s the key to this method:

Write everything from his eyes. All the things he wants.

All the dreams he desires.

This story is NOT about you.

You will basically be writing the future vision your man craves, and subtly injecting yourself into the picture.

so why is this all about him? Because for one, it’s probably the only way you could get him to read it.

And the second reason, what person does everybody like to hear about more than anything else? Themselves!

And when he reads this story he will be hooked on reading it because it’s his story. Why is this method so powerful?

Because your man is ALREADY envisioning these future pictures of himself succeeding in his mind.

And when you paint that picture and include yourself in the story, he’ll automatically picture you in his future!

His brain will unconsciously do it, he won’t even have a choice.

All from a story you wrote. Every time he ever thinks of where he’s going in his life, he can’t help but to see you in it!

**Quick Side Tangent Before We Continue**

What makes a woman irresistible and irreplaceable in the eyes of her man?

Your ability to reach deep into the depths of who he truly is and inspire him.

The truth is you must offer something much rarer and more valuable than sex if you want him to always treat you as something important in his life.

Ask yourself: what are you bringing to the table he values deeply besides sex or companionship?

Sex isn’t enough to make a relationship truly thrive to a man.

Men have this deep rooted unconscious fear that their entire life, their contribution to the world and their existence is pointless, meaningless, and insignificant.

And at the same time, every man has hopes, dreams, and aspirations.

And here’s the most important part: In order for your man to feel truly alive and truly fulfilled, he needs to be pursuing his deepest aspiration and his “mission” in life.

Your ultimate gift as a woman is to inspire him to do just that so that he sees a future with you.

You need to make him realize his ultimate potential as a man.

And when you can do that? He’ll move mountains to keep you in his life and ultimately will also give signs that he wants a future with you.

So How To Do That to Inspire Him and Also Make Him See His Future With You.

Take a piece of paper, and write his name at the top and a future date.

For example, I am not a woman but since I understand a woman’s heart, her mind and her psychology I would go about this like this.

Then I want you to write a story of your man 3 or 5 or 10 years from now, him doing all the things he loves.

All the toys he wants, his dream job, where he’s living, everything you can think of that makes him excited about life.

Write down all the goals he wants to accomplish too.

Go crazy! Whether it takes you 1 page or 100, just write.(definitely do this by hand, makes the method extra potent.)

Now as you write about him you want to be injecting visions of yourself in the story too. But not too much.

Here’s an example segment that you can write to your man to make him see his future with you.

Can you believe you did it? You finally fired that asshole of a boss Lawrence.

YOU now have the respect and admiration of the crew you manage.

And the vacation you and I took last month?

Where we were sipping margaritas in Sayulita Mexico…the exact place you dreamed we would go…was unreal!

Today is gonna be awesome because you and I are gonna hop on that big loud green custom built chopper of yours–1 out of 13 you have– and take a ride down to that diner you live 100 miles away.

We’re gonna meet up with all your biker buddies, kickback and have a good time.

Remember last week when you just spontaneously said, “Let’s have a stay vacation at the Marriott”, and we spent 2 days there?

That was a BOSS move! And the way you got me off in that hotel room…back to back to back…

I completely surrendered my body to you… it gets me soaking wet thinking about the way you dominated me.

It make me so happy and proud, to be with a man who takes what he wants in life, our life is like a fable!:):):)

I promise to be by your side with ever YOU want, and where YOU want to take our life… etc etc etc…

Remember this is just an example and you can write down in your own way.

See what’s going on here? I took all the dreams that your man wants in life, and wrote a story of him living out those dreams…with YOU by his side! NOTE:

I have to say this again, because it’s sooooo important to making this magic method work and make him see his future with you:

Write about HIS DREAMS AND GOALS!!! NOT yours.

You know, “house car kids dog”. This almost makes him feel like he’s forced to do these things.

No no no… you must first align yourself to the dream future he ALREADY has, before you were even in the picture.

And look, a man will give you all everything you want, as long as he can picture you in the future vision he has right now.

His future. His goals and dreams.

The ones he already has. After he knows he wants to be with you, he’ll go out of his way to give you everything you want.

Ladies, just use this method!! An I can GUARANTEE you it will make your man see no other woman for him but you.

And it will bring you two so close and emotionally connected, you can’t even imagine.

How to deliver the letter:

Your next question may be, “OK, I wrote the letter, now what?

How do I deliver it to him? Do I just give it to him?

The key is to let him read it while you aren’t around.

You don’t want to be standing behind him watching him read it.

The letter has to come as a surprise. Listed below are good ways to deliver him the letter.

And that’s the REAL key to make him see his future with you.

➢ Leave it in his pocket, suitcase, backpack, any place you know he’ll open and see.

➢ Put it in the mailbox. Get an envelope, a stamp, and mail it to him. If he lives with you, simply put it in your mailbox and make sure he gets the mail that day.(this is the way I usually do it)

➢ Leave it on his desk before you leave. If he has a laptop, put it in between the top halves.

➢ Fold it up and put it in the book or magazine he’s currently reading.

➢ Leave it in his car.

➢ Basically, anywhere he will stumble upon it!

Also, here are a few topics you can include in your letter…

➔ where he wants to work

➔ his dream places to visit

➔ how he has power over other people

➔ how many kids he wants

➔ how successful he is in his work

➔ how much he gets you off

➔ how he’s looked up to by many

➔ how proud his parents and others are of him

➔ how he got revenge on the people who doubted him

Still wondering does he sees a future with you or not?

Here is a Pro Tip: -You can get your man involved too!

I recommend you only do this after you do the method yourself the first time.

But after the first letter, write the next one together. -You can use this with your Ex you want back.

Here’s how: Write the same letter. But this time instead of writing his name at the top of the letter, write,”What Tina and Dave could have been” this will really get him emotionally and in love with you.

Anyways, I will stop here. I believe you truly loved reading this guide on does he sees a future with you or not.

And if you seriously love it then I request you to watch this amazing video by my friend and relationship coach Amy North.. Trust me you’ll love it.

Divorce Trends To Know in 2022 (This Stats May Surprise You)

How To Win a Man (11 Super Captivating Tips)

8 Differences Between Beautiful Women And Women Who Are Hot