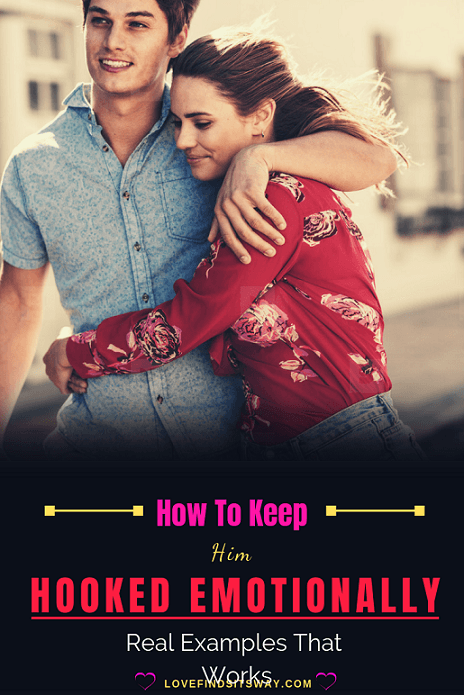 You have been in a relationship, things are going smooth and everything is fine but you know something if you do not know how to keep him hooked and interested in you he will leave.

You may feel I am talking harsh but he will leave if you do not know how to keep him hooked through text, or emotionally or sexually.

Ever seen a soap opera? Or any of the T.V. show series like Lost or Game Of Thrones or Orange is the new black?

Why do millions of people get so antsy with anticipation for the next episode?

Because at the end of each episode, the show always teases what's to come in next week's episode.

There is always some hair raising reveal that won't be solved until you watch the next episode.

And this gets millions of people hooked naturally to see what the next episode reveals.

This is a psychological technique that you can also use to keep your guy hooked and get his attention you.

This technique is so powerful that it works even when you are in a long-distance relationship.

It's because they open a "loop" or an idea, but don't close the loop until next week. That's what you'll learn in this article.

How to Keep Him Hooked With You?

You'll be using this hooking principle in a specific way to get your guy to pull his hair out thinking about you.

Here's one more example of this getting him hooked principle to bring it home in your mind:

Imagine if one of your coworkers walked up to you and said,

"Hey you won't guess what the boss said about you yesterday at the meeting!".

Then imagine the coworker saying next,

I'm willing to bet a hundred bucks you wouldn't be able to concentrate on anything the rest of the day.

The thought of "what did my boss say about me?" would be running through your head ALL DAY!

Heck, you'd probably drive to your coworkers house demanding they tell you what the boss said about you.

That is why this hooking technique is extremely powerful, and it's works every time.

Here's how to do it to hook your man

Next time you and your partner are about to leave each other's company, go to your man and say this to him...

You: "Hey babe, I had this crazy dream about you that shocked me...

Then he will say something like, "What happened in it?"

You: "I'll tell you next time I see you"

Don't Miss: How to Hug a Guy Romantically & Keep Him in Love With You

The key is to do it right before you two part.

So for instance, right as he is walking out the door, or getting in the car.

Now look, he will probably call text and beg you to tell him what happened.

But don't give in! Stand strong and tell him you can't tell him yet.

So the next step is the payoff. This is the part where you reveal what your dream was about.

And by that time he will hooked with you thinking what it is that you were about to tell him.

The next episode he's been dying to see. What you you're going tell him a dream story of how he was kicking butt towards his goals and aspirations with you right by his side.

So you must know what he is striving for in life in order to use this method and get him hooked.

So let's say your guy has always wanted a beefed up Ford Mustang, to fire his asshole boss and own his own car wash business, and to travel the world.

Here's an example of the story you’d tell him:

"So it was a crazy dream, ever had one of those dreams that felt too real?

Well it was you and me floating in this weird place,

yet we weren't floating, we were in that crazy fast Mustang you always talk about getting,

and I asked where we were going,

and you said "to open another car wash in Paris" then you stopped to get gas in the middle of the ocean, popped the hood, and your boss Larry was stuffed in the engine spinning a gear or something like he was the engine,

and you and I cracked up laughing... babe the dream was surreal I woke up with goosebumps, happy, and laughing at the same time!"

The secret to the story you you paint the future vision he is striving to accomplish, and put yourself in the picture too!

And that will get him hooked emotionally with you...

You'll see his face light up as you tell how he was conquering all the things you know he wants in life.

Now your dream story doesn't have to be as bizarre as this, it could simply be you saying how in the dream he was beating everyone at golf as you rooted for him on the sideline, and how happy the dream made you feel.

Just make sure you link yourself to him as he is winning at something.

Why It works: It create a positive future story that taps into his deep primal drives of Freedom, Power and Respect.

And not only that, he pictures himself succeeding with YOU by his side.

A man also loves the idea that he has "fans" The Results Of Using The Method:

This method keeps you on your mans mind all day and night long.

He won't even be able to focus.

He'll be antsy to know what you have to tell him.

Then ,once you do reveal the story to him, he’ll feel empowered plus see you cemented in his future once you tell him the story.

This is a great method and you should it often.

You can also use this with other people too. It's an amazing way to get people thinking about you.

Extra Tips on How to Keep Him Hooked:

For example you can send him a text saying,

And the surprise can be something as simple as picking up a pint of his favorite ice cream Or you could book a hotel at a nearby city for the night.

Either way, he won't be able to concentrate for the rest of the day after seeing the text.

#2. You can also do this through text with a guy you're just dating.

Simply text him, "Hey so last night I had this crazy dream about you".

#3. Use this with that guy you've wanted by doing the same exact method as above, tell him you had a dream or a thought about him, and he'll be egging you to tell him about it

Choose a past experience you two shared.

The location you two first met

The place you two first kissed

The place he asked to be your boyfriend

The place you first had sex

The place of your first real date -Any place you two shared an intense emotional experience together you haven't been in awhile.

So let's say for instance, you choose the place you two first met. And it was at a specific park.

Dress up in the same exact outfit you wore that day.

And I mean down to the lipstick, the bra, the perfume, EVERYTHING!

Tell him to meet you there, then while you're together, say to him,

"You know what's crazy? It feels like I'm just meeting you again!

This is the place we had our first date!

Then start bringing up the exact things that happened that day while you two were together.

Talk about everything, even if it's something embarrassing like how you almost didn't show up to the park that day because you were sooo nervous about the date you were having bad gas.

This will open him up to how he felt that day too.

Your whole goal with this method is to respark the feelings and hormones that surged through his mind when he first pursued you.

Another thing: If you two ate strawberry ice cream together on a specific par bench that day?

Do the EXACT same thing.

Recreate the scene to spice up things as well as you can.

You can use this method often, just write down a list of awesome experiences you two shared, what the location of them was, and find excuses to go there with him.

Sometimes you won't even need to bring up the experience you shared, he'll do it himself!

Like for instance a few weeks back, I had to pick up my wife from work.

Well on the way home, I decided to stop and pick up my son food at a BBQ restaurant.

Haven't been there in ages. So we get the food, and as we're walking back to the car I said ,"Remember we made out like teenagers that night in this parking lot?" she had totally forgot, but I didn't! 😉

Why It works: Dr. Jeffrey Bernstein, PhD D, author of the book Why Can't You Read My Mind? says this:

"When he experiences something that he associates with falling in love with you, those intense, sensual memories trigger a positive physical reaction and generate instant longing," says Bernstein.

The real power is combining the the good memories with the actual location.

Because, it's one thing to tell somebody,​

"Hey remember how much fun we had that day at National Park?"...but ten times more powerful to actually to say,

"Hey remember how much fun we had that day sitting right HERE on this bench at National park today?"

So you should always find ways to use this methodology using different situations to get your guy hooked emotionally and reignite those good memories you two shared!

Give me 3 days & I'll show you: How to Make a Man Sexually & Emotionally Obsessed With You (And Only You) Without Even Touching Him.

Get Free access to my 3-Day Language of Desire Course & learn the naughtiest techniques & magical phrases to trigger a massive rush of "magic love potion" in his mind so he shakes with desire, sees you as his one & only love & would never stop loving you.

Join 50,000+ happy females who've taken my course to transform there relationships from boring to sizzling HOT.

Find Out: why majority of women all over the world struggle with their relationships & sex lives.