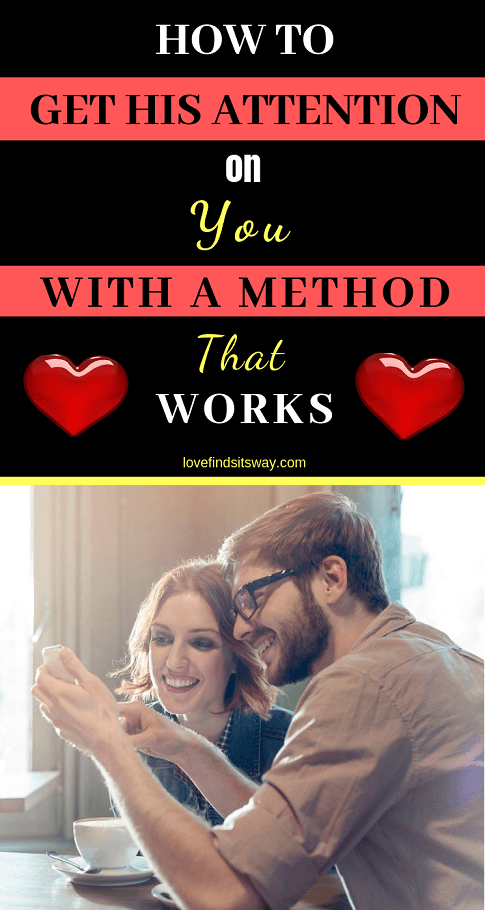 Are you ready for an attention-getting bomb? Do you keep thinking about how to keep his attention on you and only you? If Yes, this article is for you.

Trust me ladies, this method works wonders for getting your guy to give you the attention you crave and get him to obsess over you.

Before we start with the method to get his entire attention on you here's a question most women never consider:

Does your man even KNOW how to give you affection?

I mean, really...is he even a truly natural romantic "type" of man at heart?

Have you ever considered he's just like 85% of most men:

Well the truth is, most men aren't!

Most men show love by being the breadwinner, doing handwork and labor intensive stuff around the house, making you feel safe, sex.

And this is why you feel so neglected, your guy just doesn't see love the way you do.

But you may wonder, "Well why the hell was he so romantic and attentive in the beginning of the relationship?

Why he use to give me so much attention in the beginning of the relationship?

He used to do all these wonderful things and made me feel so good."

Here's two reasons to think about...

#1. You FELT More Romance Because The Relationship Was New and that is why he was highly interested in you.

When you two first got together, you were in a bliss.

The relationship was new. You two were getting to know each other... enjoying each other and loving every second of your time together.

The attraction between you two was sky high. You would laugh at his corny jokes and all.

So since you were in this "new bubble of love", of course the things he did FELT more romantic to you.

All the 3 love hormones were firing through your mind on overload.

He did all those amazing things to attract you, to "wow" you and win you over.

Then, as the relationship went on, he stopped because he isn't naturally an attention and affection giving type of man, like 85% of all men.

Now this doesn't mean he doesn't love you, so don't feel like you were tricked.

It's just most men will soak you with attention during the "courting stage" of a relationship, and pretty much stop after a relationship matures.

This is the reason he feels everything is alright, yet you feel emotionally neglected. Because to him, everything IS alright.

So guess what, it's NOT YOUR FAULT! More than likely, you aren't doing anything wrong in the relationship.

It's just most men don't realize they need to KEEP on feeding their woman attention and affection after the courting stage.

So what's the solution? Are you doomed to live in a passionless relationship? Not quite.

Here's What You Have to do: Teach Him! to Keep His Attention On You.

Show him HOW to give you affection and attention.

Tell him exactly what you want him to do. And this is not in the typical, "honey why don't you pay attention to me" way.

No no no...that's too vague. You need to be specific. Because most men have logical and specific focused brains.

Want him to hold your hand while you two are walking? Tell him.

Now you can use this straightforward approach, going up to your man and telling him,

"Hey, I need you to kiss me more, give me hugs, and cuddle every night".

And it may work. But I don't recommend it, because it could backfire.

It may come off as nagging or demanding... pushing him further away. The best way to do it then?

I call this the attention grabber method because men and women are different, and women usually want different things in relationships (and life in general).

This attention grabber method is amazing because you'll get your man to give you those sweet touches and kisses again.

And it will be in a way he'll love doing and will die to give you the attention and love you desperately need.

What you'll be doing is a little game of give to get.

You're going to be giving your man something, and in return getting something you want.

How to do it to keep his attention on you?

There are two ways you can do this method, by text or in person. I'd recommend you start with the text version first.

So let's start with it.

The Text Version In this version, I want you to send the 6 texts to your guy below.

Text 1: I was thinking, my job as your girlfriend/wife is to feed your masculine power right? His response: Damn right!

Text 2: Well I came up with a challenge His response: What

Text 3: Tell me one new way I can make you feel more masculine, and I'll do that one thing three times this week. His response: Cook me steak for dinner!

Text 4: OK I think I can do that 😉 I guess to keep the challenge fair, you could do one thing to enhance my feminine power too His response: What Text 5: Um lemme think...

***Wait a few minutes in between these two texts before responding***

Text 6: OK I got it, how about you give me a 30 second shoulder massage His response: OK I can do that.

Can you see the power in this?

This method is so effective because you get what you want...but what's more critical is he gets what he wants too.

And this means he'll be TEN times more likely to give YOU what you want.

Remember this: It's easier to get you what you want from someone after you give them what they want first!

Most women fail to get their man to comply because they are too "me" focused.

This kind of mindset keeps a man from wanting to give you what you want because he feels he doesn't get anything out of it.

So he shuts down on you. So with this method you are literally sneaking in your wants by feeding him his wants first!

This attention grabber method is immensely potent. And will boost the intimacy and emotional connection between you two instantly.

You two are teaching each other exactly what you need to feel more powerful and satisfied and secure in the relationship.

No more vagueness. Specific things that you'll both benefit from.

Note: It's important to start off with his wants first.

Because this comes across as this whole idea of the challenge was about satisfying him.

And not you nagging him about not paying attention to you, which keeps him from ever giving you what you want.

Another note: Keep it to 1 thing each of you can do. If you make it more than one, he may feel overwhelmed and not do anything.

So for instance, don't tell him, "You can cuddle me more, send me sweet texts, hug me when you arrive home". Chances are he won't do any of them. Just keep it to one.

And one last note: In text 6 when you tell him what you want, be sure to make it appear as if you hadn't even considered yourself in the challenge.

Take a while to respond back, as if you have to think of something.

Because you want this challenge to appear as if you were only thinking about satisfying him.

Remember, the only reason you're making this "him focused", and acting like you didn't even think of yourself is so he will actually want to participate.

If you did the opposite--telling him you came up with a challenge where he should give you 3 back rubs this week-- he will pull away and not want to play.

Start with his wants first, if you want to keep his attention and interest on you.

Now here's the live version where you do it in-person. You simply go to him and recite the lines below.

Try and do it when he's in a calm, relaxed mode. While you two are having dinner is a perfect time.

The Live Version: You:

"Babe, so I was thinking. You're my man. My manly man. It's one of the reasons I love you so much.

On my way home I was thinking, my job as your girlfriend/wife is to fuel your masculine power right?

You: Well I came up with a little challenge, tell me one new thing I can do to make you feel more masculine. And I'll do that one thing 3 times this week.

Him: Um, you could send me sexy pics while I'm at work.

You: OK I think I can do that! I'll start today. And I guess to keep the challenge fair, you could do one thing to enhance my feminine power too

Him: So what's your?

You: Um lemme think... OK I got it, how about you could look me in my eyes and tell me I'm the most beautiful woman you've ever seen, then kiss me.

The reason I recommend the text version of the attention grabber method first is because if you're like many of my other female subscribers, you'll pull your hair out trying to memorize lines.

So choose the version that works for you.

DO this method once every few weeks or once a month, adding a new action you both can do for each other.

And before you know it, he'll be giving you all the things you want! What if he stops feeding your want?

Simple. Stop feeding him his! And if he complains, tell him it works both ways.

So what do you want?

Here's a few ideas to get you started:

-Back or shoulder rub

-Give me a compliment

-Play a board game together

-Give me a public display of affection

-Give me a 30 second hug -Foot massage

-Hand holding -Tell me you adore me

-Send me a sweet text

Also, get creative. You can add more rules to the challenge if you'd like. It could be whoever completes the challenge during the week gets a special prize.

And one more thing, you're going to notice men's wants are simple.

It's always either he wants you to cook him something, or something to do with sex.

I guess it's true what they say the way to a man's heart is his stomach and his pants!

I will stop here. If you loved reading this simple but effective guide on how to keep his attention on you then you'll also love this powerful video presentation.