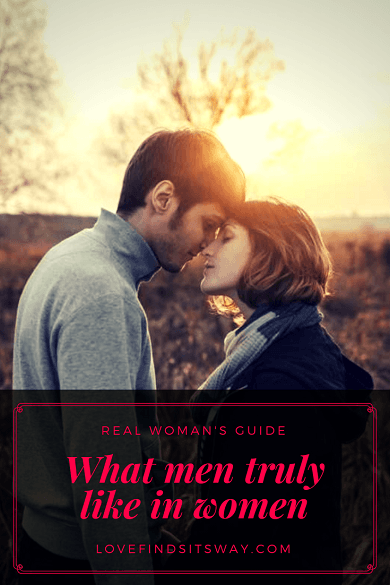 As a woman who’s interested in intensifying her powers of ATTRACTION, you must have noticed that there’s a lot of information out there that’s framed in the negative. In fact, first, you need to know what men like in women & what men love about women.

In other words: you can glut yourself on the mounds of readily available information on what NOT to do with men.

What you SHOULDN’T do. How to stay OUT of trouble with a man, what to stay AWAY from, and so on.

But it’s important not to lose sight of the fact that it’s not just about ‘steering clear of the minefields’ that, in fact, the BEST and MOST POWERFUL thing you can do is to keep sight of the POSITIVES.

Here’s what I mean by this: if you pay attention to the things that men LIKE in women, that’s going to be much more attractive than if you focused exclusively on NOT doing what they DON’T like.

If you tend to get a lot of stuff RIGHT, and don’t focus exclusively on what NOT to do, it’s a lot more powerful than if you made no mistakes but didn’t do anything ACTIVELY ATTRACTIVE, either.

Don’t Miss: How to Not Drive Men Away (Hidden Secrets Revealed)

There’s a lot more scope for ‘human error’ and plain old INDIVIDUALITY when you’re spending a lot of time hitting ‘home runs’ with guys … and in fact, with life in general.

So bearing that in mind, I decided that my most helpful contribution towards this article would be a configuration … a ‘star map’, if you will … of the things women do that guys LOVE.

What do men like in women? The things that make them FORGET about any niggling misgivings and the things that FORCE a guy to fall in love, DESPITE his ‘single and loving it’ reservations.

If you’re anything like MOST WOMEN, this kind of information is like DYNAMITE so use it carefully.

Not for use by children, and all that.

You have been warned.

And so now, without further ado …

Thing Number One: Allowing Him To Give Freely (WITHOUT Pressuring Him To Do So)

I realize the urgency with which some of you want to ‘solidify’ the relationship and ‘lock him down’.

But this is a HIGHLY MISLEADING INSTINCT and a huge mistake you are making with your guy and if you pay attention to it, you’ve just recruited yourself as your own WORST enemy.

And this is largely because men – as I’m sure you know – generally don’t want things to be too EASY.

In fact, this should all come pretty naturally to you, because it’s been my experience that WOMEN are just the same.

We neither of us like things to be too simple … we like a bit of a CHALLENGE.

And when someone is THERE all the time … readily available … completely HANGING OUT to spend time with us and (this is the clincher) actually exerting mild but UNMISTAKABLE PRESSURE on us to reciprocate that’s when it all goes pear-shaped.

Recently, I read about a professional dating coach advising his male clients to think of women as being like cats.

Cats are aloof. They’re reserved. They tend to shy away from effusive, unearned shows of affection.

And interestingly enough, cats always tend to single out the one person in the room who is NOT showing them vast amounts of affection and determine to WIN THEM OVER.

How many times have you seen an avowed ‘anti-cat’ person shying desperately away from the cat’s touch as it rubs up against them ignoring all the other eagerly-outstretched hands reaching toward it?

It’s like the odor of ‘not interested’ creates a DETERMINATION in the animal (and, says the guru, the woman) to ‘win them over’ and ‘conquer the challenge’.

Like MOST things in the ‘dating and relationships’ field, this is NOT a GENDER-SPECIFIC ISSUE.

It’s not just WOMEN who are like this MEN ARE TOO.

If you show them too much affection, or try to ‘lock them down’, they skedaddle out the window like greased lightning.

But if you back OFF a little bit and give them a bit of room and a bit of SPACE that’s when they come rubbing around your shins and purring at you for some cuddles.

So if you want to endear yourself to a man, learn to LET HIM GIVE when HE WANTS TO GIVE without FORCING HIM, COERCING HIM, or BARGAINING with him.

And when you do so, that’s when he senses that there’s enough ‘space’ for him to come FORWARDS a bit. And that’s what men like in women.

Here’s a hint for you: it’s when you allow a guy to give freely, WITHOUT pressuring him to do so, and WITHOUT asking him to do so, that you get a hint of what kind of a man he is and just how much he’s ABLE AND WILLING to give.

This can save you a lot of hassle in the long run.

Because if you’re matched up with someone who just can’t give you what you need without regular ‘coercion injections’, that could spell trouble in paradise.

Thing Number Two: Having Your Own Opinion And Asserting It Strongly

Don’t worry too much about what he thinks.

Having your OWN opinion, and caring about what YOU THINK FIRST, is pretty damn sexy as far as most guys are concerned.

Here’s why: it’s because it’s relatively RARE to find a woman who puts HERSELF first.

From what I can tell, a lot of women were brought up to ‘be nice’ and ‘put other people first’ and never be ‘too honest’ about what you REALLY think in case it hurts somebody’s feelings, or makes you seem like one of those ‘hard women’.

And as a result, there are a LOT of women out there today who invariably DEFER TO MEN and defer to OTHER PEOPLE when it comes time to make a DECISION.

Here are a few stock phrases that I’ve heard over and over and OVER again on my dating sojourns:

‘I’ll just have what he’s having.’

‘Whatever you want is fine by me.’

It’s like these responses are INSTINCTIVE for most women as though you believe, on some level, that guys find this ‘feminine dilly-dallying’ ATTRACTIVE.

IMPORTANT FACT: This is a CRAZY MISUNDERSTANDING!

Men – high-quality men with brains, who are capable of appreciating truly high-quality women – actually PREFER it when you know what you want.

Having a mind of your own is hot. It’s sexy. It’s assertive, and it shows you have a brain and that you have the SELF-CONFIDENCE to ACT on it.

So: don’t feel like you have to agree with him all the time.

If you feel differently about something, SPEAK UP about it.

This is EXTRA-IMPORTANT to grasp if you are one of those women who tends to say that ‘everything’s fine’, and then SULK about the fact that it’s actually NOT fine, and that he didn’t spontaneously pick up on that fact.)

Get a spine. Develop your opinions. Speak up about them. Don’t let him decide for you.

Men are attracted to women who have brains and the BACKBONE to USE them. 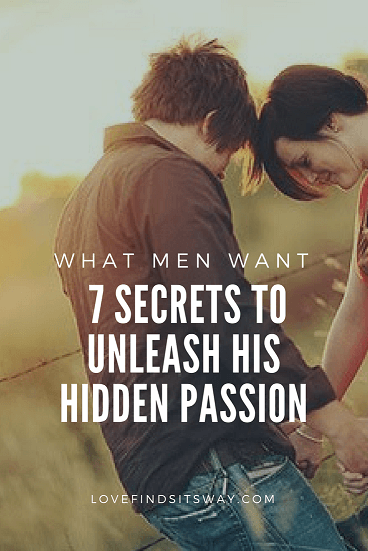 Going out for dinner and a movie every Friday night might seem like fun for the first couple weeks but after episode number 14, it feels more like CONVENTION than something cool to do together.

And guess what? Guys tend to have SHORTER attention spans than women so if YOU feel like the spontaneity’s dried up, you can bet money that he’s been feeling the same way for some time now.

Some women feel like ‘invention’ and ‘initiative’ are ‘guy things’ and get stuck into the rut of waiting for HIM to come up with suggestions and ‘take the lead’.

And yeah, it’s true that I do coach my guy clients to learn how to ‘be a leader’ but ONCE AGAIN, this is a HUMAN NECESSITY, not just a GENDER ISSUE.

You ladies need to learn how to take the lead once in a while too. Believe me men love women who have this quality.

Well, but that doesn’t mean ‘bossing him around’ or ‘organizing your weekends together so he never gets a say in the matter’ it just means that you have some unusual ideas for things to do together that YOU are enthusiastic about.

Because if things get predictable, that’s when BOREDOM sets in and that’s when spending time together starts to feel like a CHORE instead of a PLEASURE.

(Especially when you combine that now-boring ‘traditional date’ with a bunch of PRESSURE about how he should ‘spend more time with you’ and if you don’t get this yet, you need to reread Thing Number One for more detail.)

Time together doesn’t need to revolve around eating food and watching movies.

Go bouldering together. Rent a ‘double bicycle’ for the day.

Pick up tickets to the ballet (if he’s the cultured sort) or a rock concert (if he’s not).

Go on a wine-tasting tour. Go snorkeling. Go for a walk in the park, for pete’s sake.

But get off your asses and move your bodies! (Why do you think sex is so fun?

Physical activity creates a BOND. Appreciate this fact and use it to your advantage!)

And don’t ASK him if he’d ‘like to do it with you’ organize it yourself, and then TELL HIM that that’s what you’re going to do.

(Not to mention feeling more RESPECT for you and being turned-on by your initiative and sense of fun.)

I suggest that, if you’re one of those women who spends a fair amount of time worrying about ‘what not to do’.

And how to prevent herself from seeming UNATTRACTIVE, that you consider turning the tables on yourself and spending some time and energy DOING rather than NOT DOING.

Try taking active control of your attractiveness for once.

You might just find that the ‘I-never-knew-it-could-be-this-easy’ results you’ve been dreaming about are, in fact, right there for the taking.

I will stop here. If you loved reading this article on what men like in women then you’ll definitely love this powerful video presentation below.

Join 50,000+ happy females “And learn the right words to unleash your NAUGHTY side (without feeling like a slut) and get EVERYTHING you’ve always wanted from your sex life…