Why Men Need Sex:5 Sexual Principles that every woman needs to know!

It’s true: men think about sex a lot and that’s the reason why men need sex more than anything else.

According to Edward Laumann, lead author of The Social Organization of Sexuality: Sexual Practices in the United States, “the majority of males between 18 to 59 report that men think about sex at least once a day – one third think of it several times a day.” And that’s the reason why men need sex.

As for gals, Laumann tells us that only 1 in 4 women think about sex on a daily basis and that’s okay!

So, in this article, I want to introduce you to the five most important sexual principles that I believe every woman should know.

Understand them, and you’ll be well prepared to navigate the tricky wa­ters of sexual attraction and at the same time understand why do men need sex more than woman.

Be prepared for some surprises: scientists are turn­ing our old beliefs about sex on their heads.

Every day, new research about sex shines a light into be­haviors that were previously thought the province of poets and philosophers, not scientists.

You may find yourself readjusting your previous attitudes about sex – and that’s okay!

Don’t Miss: 17 Next Level Tips to Please a Man Sexually in Bed

A note to those of you who feel squeamish talking about sex:

Some of the research presented below may make you feel uncomfortable.

However, if you’re going to have sex, you need to be prepared to talk about it.

Personally, I believe that a person isn’t sexually mature until they can talk about “pe­nises,” “vaginas,” and “orgasms” with their partner.

The sexual organs are a part of your body as natural as your heart and lungs. There’s nothing embar­rassing or off-putting about them.

So do you want to understand men and sex?

Do you want to understand why men need sex, why men crave sex more than woman.

If you answered yes, then go ahead and discover the 5 Sexual Prin­ciples that every woman needs to know!

Let’s get this out into the open.

Men don’t want sex because they’re lust-crazed beasts who don’t respect you as a person.

Men want sex because their physical and emotional health depends on it.

Here are some facts that you may not know.

The male brain has 2.5 times more space devoted to sex than the female brain.

The more sex men have, the longer they live.

At least, this is the conclusion drawn from a 1997 study by Queens University in Belfast, which found that, of the thousand middle-aged men it studied, those who had the most sex had half the death rate of those who had the least.

Having sex three or more times a week can cut a man’s risk of stroke or heart attack by half.

Specifically, ejaculat­ing more than five times a week can de­crease a man’s risk by a third.

Sexual abstinence can lead to increased aggression in males.

They believe that controlling the sex drive is merely a matter of will­ power.

What many of us don’t understand is that men think about sex so much because of how their body is wired.

A man’s desire for sex is actually an im­portant message from his body, encouraging him to flush out the seminal fluids that have built up.

Frankly, men need to have sex in order for their body to perform optimally, and here’s why…

When the seminal vesicles fill up, they send a signal to the male brain, sensitizing him to sexual stimuli.

Men will find themselves occupied by sexual thoughts until that pressure is released.

The only way to release the pressure in the seminal vesicles is ejaculation, which releases the seminal fluids, and the process starts all over again.

Some researchers suggest that carcinogens can build up in the prostate gland, increasing the importance of flushing out the ducts regularly.

In a sense, then, a man’s desire for sex is just as important as the hunger pangs that tell us we need to eat. It’s a message that he should heed for his good health.

Yes, sex is actually good for you. Enough research has been gathered proving the myriad health benefits of sex that, personally,

I believe doctors should prescribe it along with exercise and good nutrition for a healthy life!

Here’s a list of ten proven ways that your health benefits from an active sex life.

Plus, your bond with your partner deepens as a result of frequent sex.

Orgasm releases oxytocin, which is known as known as the “love hormone,” and high oxytocin levels make you feel more connected.

If you’re worried that too much sex can be harmful to your health, you’ll be happy to know that no research has been able to uncover any ill effects caused by a high frequency of sexual activity.

According to many physicians, there’s no way a woman can overdose on sex.

Dr. George Winch Jr. explains, “I don’t think women can have too much intercourse, so long as no sexually transmitted disease is introduced and there’s not an inadvertent pregnancy.”

Don’t Miss: How to Attract a Man (12 Points Checklist)

#3. Sexual Principle: The Sexual Experience is Different for Each Gender

Dr. Holstege studied how the brain responds to orgasm. He discovered that the male and female brain respond to sexual arousal quite differently.

The male brain focuses on direct sensory input from the genitals, while the most notable change in the female brain was that the areas of the brain responsible for fear, anxiety, and emotion showed reduced activity.

It means that, for him, the physical sensations he’s feeling are all-important.

For you, it means that feeling safe, secure, and relaxed – not having to think or worry about anything – are crucial to reaching the Big O.

Very few men and women understand this difference between the sexes.

You may wonder how he can get aroused at the slightest touch, while he may wonder why his sexual acrobatics don’t impress you much.

#4 Sexual Principle: You are Responsible for Your Sexual Experience

One of the things that constantly surprises me is how many women place the responsibility for their sexual pleasure in their man’s hands.

They believe that a skilled lover will know what to do, without the woman having to do or say anything at all.

Not true. Your sexual partner is not responsible for your sexual pleasure; that’s your responsibility.

In a 2002 study of college students, 98% of men admitted having masturbated, compared to only 44% of women.

It’s certainly not something that mothers talk to their daughters about.

But now more than ever, female masturbatory aids (also known as sex toys) are available from a number of female-friendly stores and websites.

Women are being encouraged to learn about their own bodies and explore their own sexual response for themselves.

If you have never seen your genitals before, then this should be your first step towards reclaiming your body’s sexuality for yourself.

Place a mirror on the floor and squat over it.

It should not be seen as a substitute for partnered sex but enjoyed in its own right.

Similarly, a woman who is comfortable with her own sexuality will communicate that confidence in the bedroom. 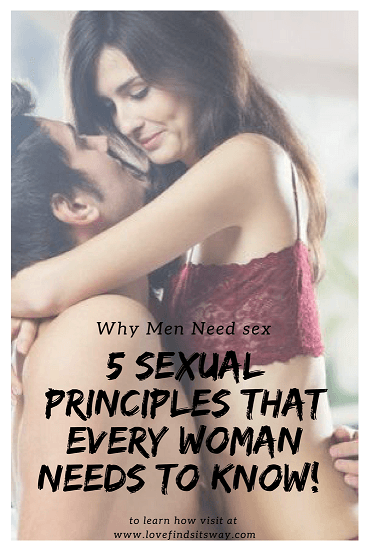 For many women, when it comes to sex, they can take it or leave it. Sex is nice, but it’s at the periphery of their lives.

Relationships take first priority: love, being there for others, caring, and communicating.

But for most men, sex is a crucial component of who they are.

A man doesn’t feel like a man unless he’s having regular sex.

Men who find it difficult to express their emotions or relate to women can experience the connection they’re yearning for through making love.

This explains why love, for a man, is irrevocably entwined with sex. The man who loves a woman wants to sleep with her, because sex is his deepest expression of his feelings towards her.

Some women, on the other hand, believe that “true love” is devoid of sexual content.

These women may believe that the female sex should be placed on a pedestal where their purity can remain untouched, with a halo of superiority gleaming over their heads.

But these women can have a difficult time finding a fulfilling relationship, because in their equation of love, they’ve removed the one factor that makes love worthwhile for a man – sex.

Of course, neither romance nor sex should properly be considered “work” at all! You should get just as much pleasure out of seducing your man as he gets out of romancing you.

One of the biggest fears men have about entering a relationship is that the frequency and quality of sex will diminish.

It’s not an idle fear. According to evolutionary psychologists, a woman’s sex drive is high in the early days of a relationship in order to create a bond between her and her sex partner.

Once that bond has been established, the woman feels less of a need for sex.

In fact, a German study found that it took only four years of being in an established relationship for a woman’s sex drive to plummet, with only 1 in 2 women at that stage wanting regular sex with their partner.

Twenty years into the relationship, only 1 in 5 women desired regular sex.

So make sure to take time for sex, for your man’s sake and your own!

Join 25,000+ happy females “And Learn how to drive any man crazy with desire and get EVERYTHING you’ve always wanted from your sex life…

Join 25,000+ happy females who've taken my FREE course & “Learn how to drive any man crazy with desire and get EVERYTHING you’ve always wanted from your sex life…