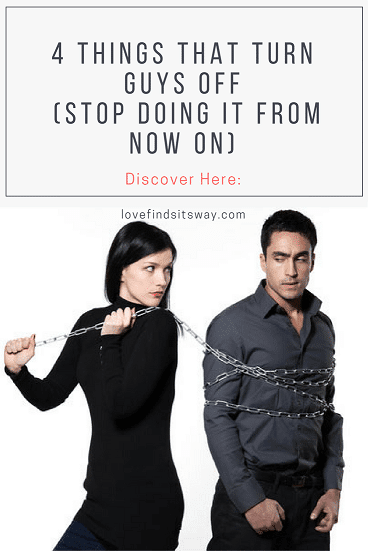 Not a lot of guys feel comfortable saying this out loud, but women do tend to do lot of things that turn guys off.

That's the reason most guys get REALLY freaked out and confused about their feelings. Enough not to want to have anything to do with her. Ever. And this goes double for a girl he has thought about getting serious with.

And yet, girls still feel free to bring on the drama at the drop of a hat. Why is that?

Well, it could be that at some point in their lives, they discovered that they received more attention from men when they made a scene of some kind.

Never mind that it wasn’t the right kind of attention; it’s enough that there was attention, for whatever reason.

Or maybe they need the “rush” that drama can give a person.

There are some people – men and women alike – who feel uneasy when there’s not something “exciting” going on, so they manufacture excitement all on their own.

And with girls, that tends to come out as crying or tantrums of
some kind and that's what turns guys off.

And believe me, It’s not attractive, to say the least.

In this post we will discuss the things that turn guys off.

#1. You do not control your emotions which is a let down for him.

It's OK to allow your emotions to come out sometimes.

But not always. If your emotions seem out of control, he is going to have a lot of trouble picturing a serious future with you, because you seem like a loose cannon. It’s as simple as that.

Relationships are work, and not everything is going to run smoothly.

If he doesn’t feel like he can depend on you in even moderately tough or uncomfortable situations, then he will think that he can’t take you anywhere and even not commit to you.

#2. He wants to be proud of you. Are you making him feel that?

Note that your man need to know that you are cool when hanging out with his friends, spending time with his family, or being his date at a company dinner.

In other words, he really, REALLY doesn’t want to worry about you embarrassing him.

You see, deep down, he needs to be able to take you anywhere because he wants someone who can share his life – not make it more difficult.

Men may run every army on the planet, but put a four-star general in a room with his wife and he will literally do anything to avoid a confrontation.

If you always have to have things the way YOU want them, he is going to feel freaked out to the point where he may not be able to articulate it to himself, but he is almost positive that at some point you are going to ruin his life.

He wants to be proud of you, and he wants to show you off. He does not want to have his buddies commiserating with him because you’re such a handful.

And he doesn’t want to either turn down invites because he is not
sure he can count on you, or walk on eggshells the whole time and watch your every move.

So its your duty not to do things that turns your guy off to keep him in love and always try hard to make him feel proud of you.

Don't Miss: 24 Points to Deal With That One Commitment Phobic Man.

Guys have goals for their lives – even if at the moment, they can’t articulate what those goals are.

They are (and get ready, because here comes an analogy) like boats about to head out into the open sea:

They have no idea if they will sink forever or come back richer than a king, but either way, it is an adventure and their chance to lead an epic life.

And, to continue the analogy, guys are especially sensitive to women who they can see are going to wind up anchoring them down, taking the wind out of their sails, and basically, ruining their life’s adventure.

Think of it this way – you surely know lots of women who give men a hard time by “joking” about their inability to do things, or notice things, or whatever way they disrespect guys. And, surprise surprise, this bothers guys a lot.

That's what turns guys off... So don't do that. Treat him like a man, try to understand him, appreciate him and encourage him to do better in life.

Don't Miss: Is he ready for marriage? If not here’s WHY (strictly for women only) 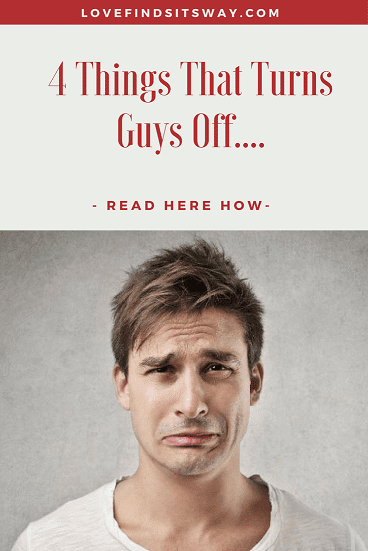 Have you ever been on a date with a guy and you just wanted it to end?
I am talking about the worst date ever, and to add insult to injury, he
doesn’t even seem to notice how badly it’s going.

If this ever happens to you, there is one sure-fire way to have him asking for the check and hightailing it out of there in seconds flat: Talk about how much you want to get married.

Just start right in with the marriage talk – how you’ve already chosen your bridesmaids, and you know where you want the reception to be.

Then ask him questions like, “You said you worked at a law firm. Do you think you might be headed for partner?” or, “How much do you think you’l be making in five years?”

Funnily enough, this tactic also works at any point in your relationship with a man.

If at any time he thinks you just want him for the ring, or the security, or because of his career prospects, it will shut down his desire faster than a bucket full of spiders down the back of his shirt.

I guarantee that his ego will love the attention and the affection you are showing him.

You just have to be careful, is all I am saying. It is more important that you show him how much you want to be with him – HIM, not his money or his job – right now, in this moment.

To be honest I can keep writing all day long but that's not my GOAL here.

The goal here is to help you understand and realize how your little stupid things can affect your relationship.

I will stop here. But before go, I would love to recommend you something awesome.

If you are serious about changing your success with men, and getting men to do more of the things you WANT him to do...

If you want genuine men who will love you, shower you with attention, and give you the commitment you deserve...