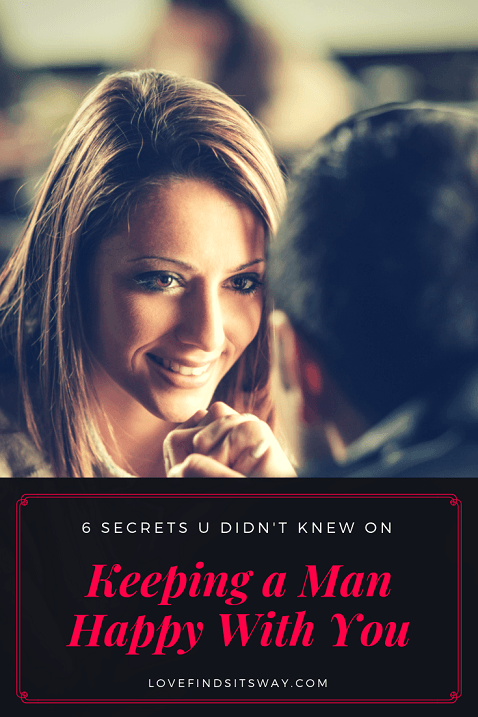 This amazing article is for all those women and girls who always wonder how to keep a man in love with you, but not been able to do so and that's the reason you're not able to  receive the kind of love and emotional connection from your men that you desperately crave.

Right? Don't worry it's all going to change today.

Following are 6 tips and tricks you can use to keep a man in love with you and boost your man’s level of emotional investment and commitment in your relationship, starting RIGHT NOW.

These 6 secrets will seriously give you the power to control your man and make him chase you for life time.

But you also need to understand your man and make him feel appreciated at the same time for this tricks to work.

I hope you got the point. So if you're ready lets begin.

Remember, a woman who respects herself doesn’t nag; she takes ACTION.
For the next 2 weeks, make a pact that you will not mention ANYTHING negative to your man about himself.

Only bright, positive comments. All problems go in a box for the next 2 weeks.

Then, LOCK THE BOX.

If your man is bothering you, don’t TALK – DO. Follow the method step by step and watch him change right before your eyes.

#2. Use The ‘Verbal Cupcake’ Technique

If you’ve been feeling overlooked and underappreciated by your man, chances are he knows exactly how you’re feeling.

Because your tone of voice is broadcasting everything LOUD AND CLEAR.

Yup: even if you ‘think’ you’re being subtle and trying hard to be nice about it, Do not fool yourself here.

That resentment and unfulfilled need will be creeping around the edges. And your tone of voice is the first thing to go.

Think back to when you first got together. I bet you had a smile in your voice every time you spoke, didn’t you?

Read More on: 8 Playful Ways To Make a Man Addicted To You (For Lifetime)

You probably spoke softly, sweetly, and even when you were asking him to do something differently for you, you asked NICELY.

So here’s the deal: a stony, harsh, abrasive, angry tone of voice will get you nowhere.

There’s a reason why Marilyn Monroe was one of the greatest temptresses of all time – and a good part of it is because of her soft, breathy, appealing voice.

I’m not saying you have to try and sound like Marilyn. (Chances are, you can’t even if you tried. She was one of a kind. Plus, speaking in a different person’s voice is kind of creepy.)

Instead, I want you to use the ‘verbal cupcake trick’.

Next time you speak to your man, pause.

And imagine you’re about to bite into a sweet, soft, delicious, warm cupcake.

Just imagining something warm and delicious like this will make your voice sweet, happy, and soft. (It sounds crazy, but it’s not. Try it and see.)

And yes, this whole technique is about DOING, NOT TALKING – but hey, conversation is the music of commitment. You might as well make your instrument as appealing as possible.

Read Here: 10 Signs He is Confused About His Feelings (It’s Time To Correct Him)

Try this technique if you want to learn how to keep a man in love with you madly for life long. This is an INCREDIBLY powerful tool that can change your relationship literally overnight.

In fact, this is in my opinion THE most powerful techiques out of all the 9 techniques to keep a man in love with you, because it works INSTANTLY and POWERFULLY, NO MATTER WHAT.

If you aren’t getting what you need from your man, you are probably feeling depressed, resentful, angry, lonely, sad, confused, and generally distant and alienated.

And when you are not feeling loving, you generally will ACT as though you feel unloving. You will act subtly (or not so subtly) resentful, angry, and alienated from your partner.

Read More On: What Your Man Think When He Looks at You – 8 Things You Must Know

It’s a toxic pattern. And you’re probably BOTH waiting for the OTHER person to put in the love and break the pattern.

That’s never going to work. You’ll both be waiting forever.

Don't Miss: What Makes a Woman Irresistible to a Man – 6 Captivating Points

There’s only one thing that you should do to give him love and make him love you.

You act ‘as if’ what you WANT to feel from him is already taking place.

So if you want to feel loved and adored, you act ‘as if’ you feel his love and adoration.

If you want to feel closer to him, act ‘as if’ you feel close.

If you want to feel sexually desired and wanted, act ‘as if’ you did feel that way. That's what men want in relationship.

If you want more attraction from him, act ‘as if’ you did feel that attraction.

CONFESSION: the first time my wife tried this skill on me, I felt like an idiot! I felt angry, resentful, and totally unwilling to be ‘the first person’ to put goodwill and love out there.

But she did it anyway.

In other words that's the LAW OF RECIPROCITY. You get what you give....Right? #4. Fake Him Out (invoke the masculine pride!)

Is there something you’ve been asking your man to do FOREVER?

Have you ever heard yourself utter the words ‘Are you even listening to me?’ Or maybe, ‘It’s like you’re just tuning me out! How many times do I have to ask?’

If so, then this technique is for you.

Here’s why this works so well:

Because of male pride.

If a guy sees you doing something (especially ‘around the house’) that HE could do, I guarantee you that he will notice.

First step: identify what you’ve been asking for with words.

Second step: think of an action you can use that would get your point across that YOU can do.

Third step: DO THAT ACTION.

Christine wanted more sex and passion from her husband. She was complaining because he was ‘boring in bed’, she hated the way he never kissed her, never romanced her, and didn’t really seem to desire her any more.

She tried buying corsets, she started talking dirty, she tried giving massages to turn him on and get him ‘in the mood’, she tried bubble baths and leaving ‘dirty books’ around the house open at suggestive pages nothing worked.

That night, she used it in bed as he was reading in the other room, and didn’t really bother to hide what she was doing.

Her husband came in to see what that weird buzzing sound was.
Guess what?

ZANG. All of a sudden he couldn’t wait to jump her bones. (‘How could she pick a battery operated- boyfriend over ME?!’)

It works trust me use this technique to keep a man in love for you. At the same time make him love you and connect to his heart.

Before we move on to the next tip. I would love to Recommend you an amazing program created by Felicity Keith "It's called "Language of Desire" You can watch the free video here and than decide. Its awesome.

#6. Deflect His Grenades Before They Kill You Both.

Does your man ever say weird, hurtful, or downright childish things to you?

Of course he does. He’s human. All humans yell and say stupid stuff sometiems. It’s a symptom of being human, and humans are flawed.

First, though, I need you to know something vital:

Flaws and perfection are not mutually exclusive.

Just because you occasionally have arguments with him doesn’t mean you’re not great together.

Some of the strongest, most loving couples I know have CRAZY fights.
Know how they can still be great together?

Because they move on from them and try to fix their relationship.

So yes, even the BEST men will say weird and even painful things sometimes.

And yes, there are going to be times when he says or does something that leaves you reeling.

I call these ‘conversation grenades’.

So why does he do it?

(Incidentally, you probably do too. All humans do this when they get upset enough, with the possible exception of Gandhi and Mother Theresa.)

They throw them when they’re confused.

They throw them when their ego is torturing them.

And they throw them when they need to get a reaction out of you to make themselves feel better.

He needs to know he’s not the only one feeling scary and bad inside.

So (of course) he then wants to rile YOU up, too, so he doesn’t have to feel like the ‘weak one’.

So what can you do to counter his grenades?

1. You can either be as ‘small’ as he is, let the grenade explode on you, and then lob one back.

So what’s the high ground?

Simple: you act with some self-respect.

See, a self-respecting woman doesn’t LOWER herself to the level of others.

The high ground means you respond with your actions, to show (not tell) him that grenade are unacceptable and just plain don’t work on you.

In practice, this means saying your piece and make your excuse to leave, keeping it SUCCINCT (remember, communicate like a man in order to get through to a man) and then you go ahead and LEAVE.

TIP: giving him a kiss on the cheek, even as you’re walking out the door, is a nice touch.

It signifies that you’ve got the emotional resilience to handle a little tantrum with grace.

It shows that you’ve got more self-respect than Aretha, because you won’t behave badly even when provoked.

And it reassures him (deep in his insecure, worried little heart) that you do still love him, and everything’s going to be okay.

I will stop here. I believe these 6 powerful secrets are Powerful enough to keep your man in love with you. But before I stop I would love to show you something that's really incredible and powerful at the same time.

Imagine being able to use this on a man who has lost interest in you. You could flip his passion switch back on and make him love you again.

P.S. This ‘mental flooding’ principle that you’re about to discover actually makes him experience an intense rush of addictive pleasure in his own brain from pleasing you.