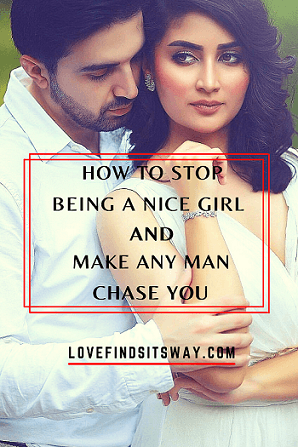 Have you ever heard the story of the so called “Nice girl”? Well if not, let me tell you the tale as this tale will help you to find out exactly how to stop being a nice girl and make any man want you and chase you.

You see a nice girl is someone who puts all her heart and soul into a relationship.

She is someone who would wait for hours & hours next to the phone expecting a call from that special guy.

She is someone who a guy keeps around for the sole and only purpose of oh well – Just keeping around… She is the girl a guy only thinks about when he needs sexual satisfaction which eventually ruins the relationship.

She is someone a guy turns to, right after he has broken up with his true love, in other words – She is usually the re-bound girl.

She is the girl who would pursue a guy long and hard even when he isn’t interested in her…She believes that if she chases him long & hard, eventually he will like her.

She is the girl a guy would only consider dating when he has run out of possible options and the only reason why he keeps her around is because she is easy to use & throw.

A nice girl is someone who spends endless hours in deep worry thinking about whether her man is cheating on her or not.

A nice girl is someone who struggles endlessly to keep a guy attracted beyond the first date or if she is in a relationship she struggles to make her man commit.

A nice girl is someone who says a yes even when she honestly wants to say no just because she doesn’t want to disagree with her man.

She is someone who does all the things she doesn’t wish to do just to please her man & keep him happy.

She is someone who always feels like a string along because her man is physically with her but emotionally into another girl.

She is someone who is always more invested & more in love with the guy when the guy doesn’t love her at all.

Ok ok…I guess you get the point and I believe you are ready to learn how to stop being a nice girl.

To be honest it really sucks when you realize that he settled for you only because he couldn’t get the other girl.

And if you can relate to any of the points mentioned above then I am sure you know exactly what it feels like to be this girl.

But here is the biggest problem – Most women usually sit around with their girlfriends talking about how much, men don't make sense or how they won't act right.

And never ever bother to attack the REAL problem.

They rather accept their reality the way it is & assume that this is how things will be for them for the rest of their life.

Most women believe that men want to end up with the "nice girl", the one that cooks for him and makes him feel like a king.

This is utterly WRONG. They feel frustrated when the guy who promised them the moon and the stars turns into a jerk over time & starts getting distant.

Men get bored and restless and lose respect for you. The reason for this is simple.

Most women are standing in their own way and if you truly want things to get better then let me give you something special.

The concept that will stop you from being a nice girl and change everything for you.

Remember men will work extra hard to win you over, when they know they don’t have control over you. Men want to be kept curious (Even if you are already in a relationship with him.)

Now let me explain why this concept is extremely important.

As humans we always pursue what we can’t have, we always want more of the things which are hard to get.

We love challenges & feel a strong sense of satisfaction when we achieve something which once was very challenging.

When a girl usually likes a guy – She automatically starts doing things to please him, starts being too nice, starts giving more than she’s supposed to, stars doing things she wouldn’t normally do.

The main issue is that guys are a lot different. If a woman is too nice they assume they have already won her over and do not have to try any harder.

And when a guy does this a woman usually feels irritated because after trying so hard she isn’t getting the result she expected.

In the process, she becomes needy & this usually drives the guy further away. Are you wondering what you should do?

Well for starters, stop being the nice girl, stop trying to please him, stop trying to make him like you, stop working hard for his attention, stop waiting on the phone for that call which never comes. STOP IT!

Situation 1 – What to do when he is starting to lose attraction for you & is taking you for granted?

Solution – You have been overly available & haven’t given him the space & time to miss you. Take two steps back & let him come to you this time.

Don’t call him for a few days and let him wonder what you are up to.

A confident woman isn’t insecure about losing the guy and gives him plenty of space and in the process the guy doesn’t feel caged and automatically gives everything you want in a relationship.

Situation 2 – What to do when he wants sex too early?

Solution – Tell him that you aren’t comfortable with such things early on, you aren’t someone who is open to something physical unless you really know the guy on a deeper level.

If a man has to wait for sex, he will automatically think of you as someone of very high value.

Every man wants sex as fast as possible but by holding it, you automatically become that special woman he would do anything for.

Situation 3- What to do when he doesn’t call you?

Solution – Sometimes a man just wouldn’t call to see how you react. Do not, and I mean do not call him no matter what.

He is the one who should do the calling. If he likes you enough, a simple phone call shouldn’t be that big of an issue for him

Situation 4- What to do when he is playing too hard to get?

Solution – Your world doesn’t revolve around him. The sooner he gets it the better it would be for both of you.

Don’t react to such petty games and stand your ground. Sometimes when you have to choose between a guy and your dignity, it’s better to keep your dignity. 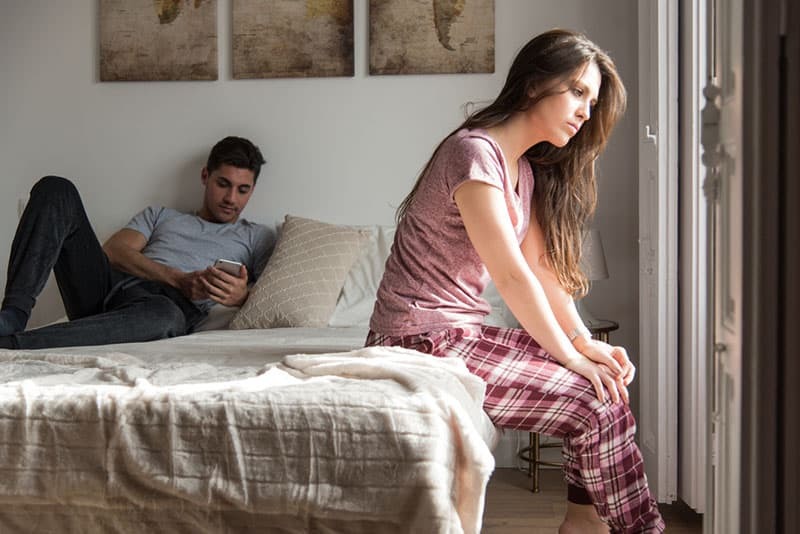 Situation 5- What to do when he doesn’t listen?

Solution – Men usually don’t respond to words, they respond better to actions. And by actions I mean – You should give him space when you can clearly see he isn’t giving any importance to your words.

By doing this you are telling him two things –

2- You aren’t scared to walk away.

Trust me, he will get the message loud and clear after that. And this is how to stop being a nice girl.

What you must remember in the process of not being a nice girl.

That's all for now. If you loved reading this blog post on how to stop being a nice girl you'll also love this short video presentation below.

Give me 3 days & I'll show you: How to Make a Man Sexually & Emotionally Obsessed With You (And Only You) Without Even Touching Him.

Get Free access to my 3-Day Language of Desire Course & learn the naughtiest techniques & magical phrases to trigger a massive rush of "magic love potion" in his mind so he shakes with desire, sees you as his one & only love & would never stop loving you.

Join 50,000+ happy females who've taken my course to transform there relationships from boring to sizzling HOT.

Find Out: why majority of women all over the world struggle with their relationships & sex lives.