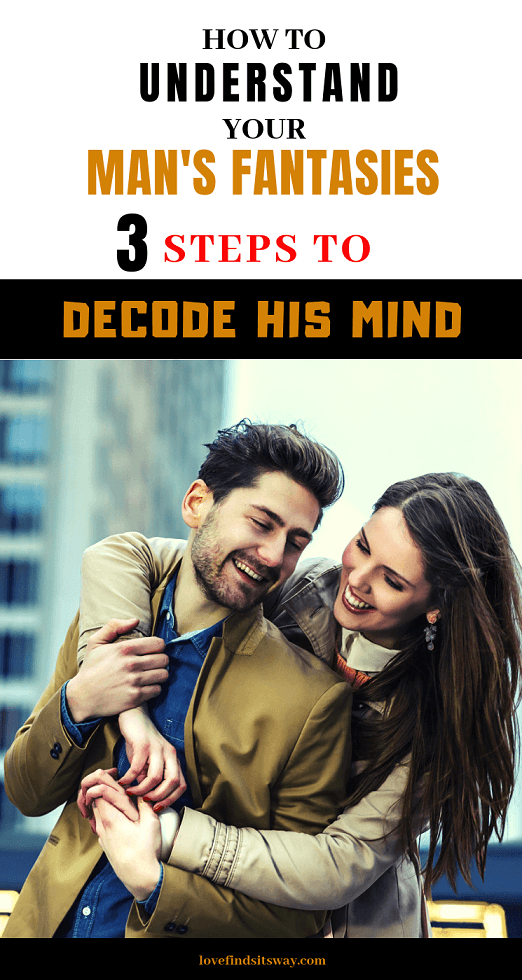 Understanding your man’s sexual fantasies, and unique sexual desires then acting on that information and eagerly meeting those fantasies, is one of the singularly most powerful things you can do to make him feel accepted, loved, desired, and connected to you.

Learning what your man's sexual fantasies are, though, can take a bit of effort.

Below we will discuss 3 powerful steps to discover his sexual fantasies and decode his mind. But before we actually get into the main content let's find out what EXACTLY are fantasy, desires and what makes him hard.

Fantasies and desires are complex things.

Some men can easily, even casually, tell you their fantasies, while other men might have no clue how to actually put into words what they deeply desire.

A lot of times what goes on in our secret sexual brains can be difficult to describe.

What we respond to sexually, or the images we think about when we climax, may not even make a whole lot of sense to us.

The thought impulses are flying fast and furious during orgasm.

The images and private mental movies may also be wrapped in shame and fear.

For example, a fairly common sexual fantasy for both women and men is being taken by force or against their will. . . which, by definition, is rape.

Sex without consent is a crime.

Rape is something that both women and men fear, and (most) know is very wrong.

So this particular fantasy can be highly disturbing and confusing. It’s one that few may be willing to admit.

Being urinated or defecated upon. Having insults hurled at them.

That’s not something they may want to talk about.

Does this mean they’re gay or bi? Not necessarily.

And depending on how open their family, friends, or lovers are. . . they may not even understand how to comprehend, let alone talk about, this fantasy at all.

One man I interviewed told me that right before he came sometimes, he thought about mice gently nibbling on the head of his penis.

He could joke about it, because he understood it was some wacky wiring in his brain.

He had no desire to get it freaky with some mice! He didn’t judge himself.

But nonetheless, that image sometimes popped up in his mind.

Now these are a few extreme examples.

However, they reflect that what a lot of people don’t always get is that sometimes what you fantasize about is not an activity you actually want to bring to life and experience.

Even less extreme types of fantasies can be scary to discuss.

They reveal our most private sexual selves.

And because we tend to judge ourselves (or at least wonder “am I normal?”), we fear that our lover will totally judge us. Or freak out. Or think we are disturbed.

So it stands to reason that for a lot of people, what they’re willing to openly talk about regarding their sexual fantasies might not be their deepest ones at all.

# So, why did I even create this sexual fantasy technique?

I created it because even if your man harbors an intensely private fantasy that he may never, ever talk about, there are still plenty of fantasies he either will tell you, or he’ll show you through his actions and preferences.

And by acknowledging, accepting, and even celebrating his unique turn ons, it will create a deep bond of trust and intimacy between you, which opens the door to deeper sharing down the road.

Discovering, accepting, and integrating your man’s sexual fantasies should be one of your favorite things about being in a trusted and committed relationship.

#A word on acceptance.

I mentioned above that everyone – regardless of their sexual fantasy – fears being judged or ridiculed if they share it with another person.

We all wonder if we are “normal” for desiring whatever we desire.

Even those who appear to be the most sexually confident women and knowledgeable, and who understand a lot about the quirks of man sexuality, are prone to having some insecurity in this area.

So when you ask your guy to reveal his sexual fantasies, or you clue into what they may be through your research, accept them and him with an open heart.

Understand that no matter what his sexual fantasies are, they aren’t a reflection of who he wants you to be.

They also are completely normal (despite whether they shock you or not).

Even if his sexual fantasy and desires initially repels you or causes you some fear.

I am going to teach you how it’s possible to incorporate something from his fantasy in several ways that don’t necessarily require you to act it out in a literal sense.

Don't Miss: How To Seduce a Man With Words & Dirty Lines (Play With His Fantasies)

So, let's learn and understand your man's sexual fantasies. . .

Discovering your man’s sexual fantasies and sexual desires require you to put on your researcher hat and take notes. There are two methods you will be doing in this step.

You can, and should, directly ask him to share his secret sexual fantasies with you.

Approach it casually and be prepared to listen. . . and share yours, too, if he asks.

Honey (or whatever pet name you use), I’d like to ask you something kind of personal.

I’d really like to know what your secret sexual fantasies are. I want to know all of the ways I can turn you on.

He may be willing to just share away right then. Awesome if he does!

THAT is really common. He might fear your reaction if you think that he thinks of other women or activities you might balk at, and so he goes with the safe answer.

That is so sweet you say that.

But I’m sure there are some things you haven’t told me about. I truly want to know because I love you.

And this is a judgment-free zone. Want me to tell you one of mine?

Go ahead and be vulnerable.

Or give him more details and context about a fantasy you may have partially shared. This creates a safe space for him to open up to you and also make him physically attracted to you even more than before.

Revisit the conversation if he hasn’t been particularly open.

Remember when we talked about fantasies the other day? I’ve thought of another I’d like to tell you about.

This is where you really go into research mode.

While he may tell you some of his sexual fantasies directly, there are other clues that you can gather up based on the sex you are already having.

Here’s an example from my one of my email subscriber's life - Her name is Emily she says (: My guy and I both like have sex in doggie style position.

Not anything particularly out of the ordinary, right?

But here’s the little detail that she finally picked up on.

He would always scoot her knees up under her. He never said why, and for a long time she just let him move her legs in that position.

What she finally realized was that he did that so he had a completely unobstructed view of her ass and was able to watch his penis enter her.

This wasn’t a complete sexual fantasy for her, but she made the connection that he was highly turned on by looking at her ass and the visual that this position provided.

This was key information she could use when she fed his fantasies.

What I want you to do is make a list. Answer these questions:

Once you have your answers you may realize this exercise has sparked other observations, so write them down!

Now that you’ve asked him to share his sexual fantasies, and you’ve also made many observations and notes about his sexual desires and preferences, it’s time to determine how you will bring his sexual fantasy to life for him.

You might think it’s all about re-enacting a specific scene or activity he’s described. . . which you can absolutely do!

But understanding the themes of his sexual fantasies is also very important.

Like I mentioned at the beginning, sometimes our fantasies aren’t exactly literal.

Also, there might specific things he shares with you that cross one of your own boundaries.

For example, a lot of men fantasize about being with two women at the same time.

Because you understand the core theme, with a little creativity, there are several ways you can incorporate it!

More on that in step three 🙂 First, you need to determine the patterns and themes.

Now that you know the theme of his sexual fantasies, you can bring it to life in a way that seduces him but doesn’t cross a boundary for you.

In this final step, you are going to take the reins and figure out how to make his sexual fantasy a reality.

I wish I could help you out specifically, but I can’t without knowing your unique info.

However, I have faith that your diligent research has given you all of the information you need.

I will stop here. If you loved reading this powerful guide on fulfilling your man's Sexual Fantasies then please do not forget to share it on your favorite social media.

And last but not the least. I have something very special for you that has the power to decode him mind and make him yours forever sexually and emotionally. All you need to do is Watch This Powerful Video Presentation Below.