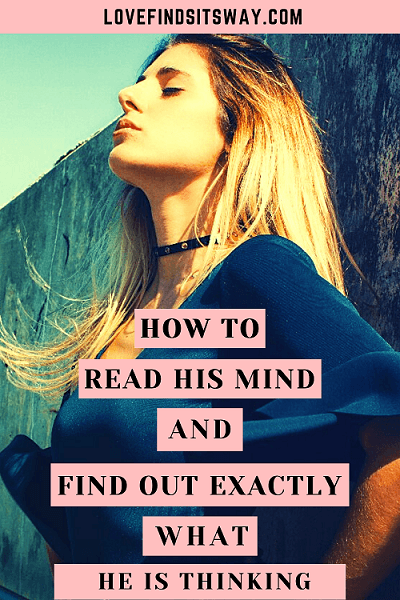 Do you believe men are complicated? Do you find them to be confusing and frustrating at the same time? Do you ever wish that you had a secret window which could help you look inside a man’s mind and figure out what he is thinking?

Isn’t it truly frustrating when you are not able to figure out how to read his mind?

Isn't it frustrating when a man never calls you back after a great first date when he promised he would?

And you desperately wait for that one special phone call which never comes?

When he says he likes you but at the same time takes you for granted and pulls away? And you hate it when it keeps happening over and over again?

When he shows loads of interest in you but then withdraws completely for no reason?

And you don’t even know why? Isn’t it absolutely crazy when men say things they don’t mean. Make promises they don’t keep and leave you hanging in the middle?

And the ugly part is…When this happens men usually never have a good enough explanation.

And this is where you always wonder – WHAT’S ON HIS MIND? HOW TO READ HIS MIND? WHAT IS HE THINKING? WHAT DOES HE WANT? WHY ISN’T HE EVER HONEST?

Why can’t he just be a bit more considerate towards my feelings and let me know what he is thinking in regards to me?

I know. I know. It kind of leaves you hopeless and you start to feel that there is something seriously wrong with most men out there.

But let me give you some truth on this matter. When a man says one thing but ends up doing the exact opposite of it he has his reasons.

And in order to understand all that I am going to show you how to read his mind.

I am sure you are probably thinking – Can it really be that easy to read a man's mind and figure out exactly what he is thinking?

Well yes it is. And if you truly want to master this art I expect your complete attention.

Stop whatever else you are doing at the moment and pay full attention to this step-by-step guide. (And no skipping any parts.) So do I have your attention now? YES? Good. Let’s get started.

If You Really Wish To Read a Man's Mind Always Remember That The Truth Sits In What He Does…Not What He Says.

If you really want to know what is going on in a man’s mind all you have to do is to focus on his actions and completely ignore his words.

Let me illustrate with some examples –

Let’s say you went out on a date and the guy promised to call you back but never did. What could it possibly mean.

I am sure you can come up with more maybes but if you were to study his action. There is one thing which is screaming out loud and that is this.

If he did. He would call you. What’s on his mind will reflect in his actions.

You aren’t on his mind and you aren’t on the top of his list of priorities. I know it sounds harsh but it’s the truth.

A man can never be busy enough to forget to call a girl he likes.

In fact! If he truly liked you he would put you above everything else going on in his life and will call you for sure.

let’s say you are confused about your current relationship and don’t know whether your boyfriend will marry you or not.

And whenever you ask him he either completely avoids the question or just changes the topic.

What’s going on here? You can again sit there and come up with more maybes such as:

Maybe this isn’t the right time to talk about it.

Maybe he is really stressed at work and I should avoid this topic.

Maybe he is waiting for the right time to propose.

Maybe he wants to be financially stable before he commits etc etc.

But what do his actions say? If you were to purely focus on his actions you’d know that something isn’t right.

Since he isn’t ready to discuss it. He is indirectly letting you know that he won’t marry you.

There is no such thing as the “RIGHT TIME” It’s all about the “RIGHT WOMAN”.

And when a guy has found the woman who triggers all the right buttons in his head. He will do everything necessary to keep her and settle down with her.

If It Is This Easy To Read His Mind Why Do So Many Women Still Struggle?

Very good question. And I’ll give you a very good answer too. It’s because most women make excuses and become blind to the truth.

I guess you know what I mean. Nothing is more painful than learning that the man you desperately love doesn’t have similar feelings towards you.

It’s extremely terrifying and in order to avoid all the hassle and pain.

Women do the next best thing. And that is to give their man the benefit of the doubt.

Here Are Common Examples On How To Read a Guys Mind.

When a guy isn’t asking you out.

Oh he is shy, and waiting for the right moment.

If he liked you enough he’d know how to ask you.

When a guy keeps you waiting on the phone or won’t return your phone calls.

He must be busy with other more important things.

He is giving other things more priority since you aren’t that important to him.

He must have been angry I know he doesn’t mean it.

He isn’t concerned about your feelings and is inconsiderate. If he was, he would never say or do anything which hurts you.

When you aren’t sure if he likes you or not.

Maybe he likes me but is too shy to say it to me.

A guy won’t keep you guessing if he really likes you, in fact he would be afraid that some other guy might take you away from him and will do everything in his power to let you know that he likes you either by words or by his actions around you.

When a guy has regular sex with you but he won’t really take you out or talk on the phone.

I like what we have currently and I don’t want to ruin things. I’ll wait for him to get more serious.

You are his sex toy, nothing more and nothing less. If he only wishes to see you when he is in the mood for sex then that alone tells you a great deal about what he wants from you.

When he is in a relationship with you but also flirts with other girls.

Oh! He’s always been the flirty kind and I know he only does it occasionally for fun. Not something I should worry about.

It’s insane the lengths women go to when they are excited about some guy and really like him.

They try to make sense of the most senseless situation and try to come up with really odd excuses to turn an unsatisfying situation into a satisfactory one.

Always remember that his actions speak louder than words. What he does is what he is thinking. And what he says might not be the truth. Make it a habit to always focus on his actions.

What You Must Remember When Reading His Mind.

That's it from me. If you loved reading this article on how to read a man's mind you'll also love this amazing video presentation below.