How To Tease a Man Sexually & Leave Him Hard (Crazy Stuff) 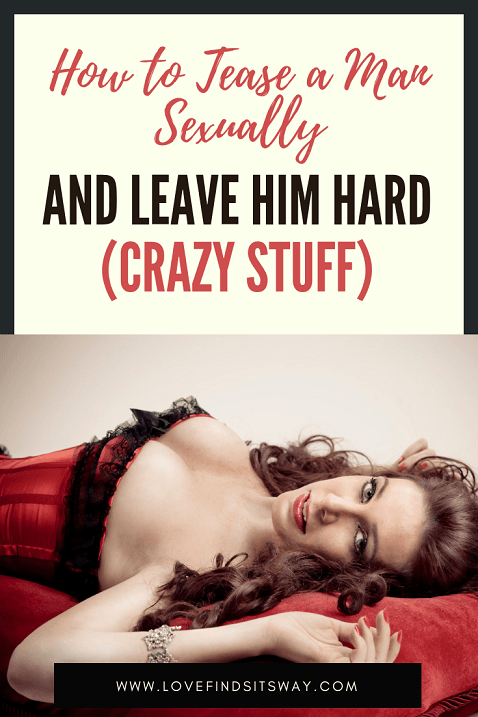 Want to learn how to tease a man sexually and condition him into arousal in mere seconds, at your whim and enjoy mind-blowing sex?

Here is my simple and easy technique that always work.

Once you’ve put the sexual teasing technique into practice, you can mention one dirty thing or word and he will instantly put down his phone or turn off that video game and give you his complete and eager attention.

Yet this technique on how to tease a man sexually is actually very easy to follow, and I will outline the specific steps for you.

I mentioned the word "condition" above.

What I’m teaching you here is a proven psychological phenomenon known as conditioning.

Basically conditioning with sexually teasing him.

So, if you are ready learn here how to arouse a man and condition him to chase you 24/7

I’m sure you’ve heard about Pavlov’s dogs, but you probably would never have guessed that the story could be used in your sex life.

He discovered that by using a bell at the same time he fed his dogs, the dogs began to associate the sound of the bell with getting fed.

And after a period of intentional repetition, always using the bell during feeding time, the dogs started to salivate any time they heard the bell, even if they couldn’t see any food.

In the dogs’ minds, the bell came to represent food as much as seeing food would.

In this guide, we are essentially going to figure out what your “bell” signal will be, and we will replace food with sex.

By combining the “bell” along with sex, you are going to train your man to respond to the signal with immediate arousal.

I had a girlfriend who absolutely LOVED giving me head and I LOVED the view from above when she gave him head.

Seeing her giving me head was very visual and sexually teasing and that totally turned me on.

And every time she wanted to give me head. . . she would throw a pillow on the floor before she knelt down.

The thing is men are visual creature and they get highly turned on looking at your physical assets and sex symbols.

So, in our (my) case the physical assets were her sexy body and the sex symbol was the pillow.

It was then that I realized the pillow toss had become a signal to me. I had become conditioned that a pillow on the floor = blow job

Once you figured it out, you'll also know the teasing secret sexy code that makes your man want you sexually.

For the sake of this post we will take many household items, clothing and other accessories that will help you to tease him sexually.

It's time to make your household object became an incredible symbol to your sex life.

Saying “pillow” wasn’t even remotely dirty, but the meaning behind it was totally hot for us.

Through that simple detail, she held the power to give me a rock hard erection any ol’ time I wanted to.

A pillow was our Pavlov’s bell.

We eventually broke up but stayed in touch.

And I tell her every time we talk that I've never met someone since then who can give a head like she use to give and at the same time tease him sexually so hard that I could. . . .barely control my senses.

Speaking of blow jobs and Pavlov, here’s another example.

A guy friend of mine told me about a woman he dated with a specific and strong gag reflex.

She couldn’t give him head unless she had a cold glass of water on the bedside table.

Immediately after he came, she needed to swallow water along with his swimmers, or else she’d gag.

This made spontaneous oral challenging.

However, he started to know that a blow job was on her agenda whenever she came to the bedroom with a glass of water in hand.

He’d see that innocent cup and immediately get excited.

The glass of water became his Pavlov’s bell.

I was never able to ask her directly if she used the glass of water intentionally to get a “rise” out of him, but my guess is she knew exactly what she was doing.

Now how you can use to tease your man sexually and develop your own Pavlov’s Erection Technique to use on your man.

Okay, ladies, it’s time to play Sexy Scientist. First, you need to understand exactly how conditioning works or how to tease a man sexually.

Using my pillow example from above:

Before Conditioning: Showing Him a Pillow = No Response

After Conditioning: Showing Him a Pillow without a Blow Job = Erection and Anticipation of Joy.

#Step one: Find your “bell” to arouse and tease him.

You need to decide what object or action you want to use as your “bell” to combine with sex. There are all sorts of possibilities here.

Some ideas to consider are:

#1. A certain hairstyle, like a ponytail. One of my close friend Neha here in India has long, gorgeous, wavy hair that her husband LOVES.

She innocently began putting her hair up in a ponytail before giving him oral to kept it out of the way.

As a bonus, his view was totally unobstructed.

After they’d been together for about a year, she realized that when she put her hair up in a ponytail, he got very frisky and flirty.

So she started doing it on purpose.

#2. Lighting a certain candle or dimming the lights in a specific way. One guy I know told me how he used to have one of those green “party” light bulbs in the lamp in his college dorm room.

Whenever his girlfriend spent the night, he’d turn off every light but that green lamp.

Pretty soon, that green lamp became known as the “sex light” between him and his girlfriend.

​#3. An article of clothing. Like lingerie, a red bra, or a shirt that unzips in front. One of my friends told me she has her “normal pajamas” and her “sex nightgown.”

Her “normal” stuff is all about comfort, and a lot of the items are a bit worn and ratty.

But the sex nightgown has spaghetti straps. She paid a lot of money for it at a fancy department store.

It’s not super sexy or anything, but she feels amazing when she puts it on.

Her husband also noticed that when she puts it on before bed, chances are high he’s having sex that night.

#4. Play the same song or CD during sex. A song can be particularly effective because it also incorporates the sense of hearing.

#5. Think of a habit, toy, or fetish you or your partner already use in your sex life. Fetishes and toys can totally work in this aspect!

And if he already associates it with sex, you are even further along in the conditioning.

#6. A specific pair of shoes. They don’t call them “fuck me heels” for nothing.

Some guys have a total thing with seeing their lady don a pair of sky-high heels just for his viewing pleasure.

High heels alter your posture, making your butt stick out a little more (guys find that hot) and they also make your legs look long and lean.

Grab your journal and jot down some ideas.

It’s okay to try out one or two ideas at first to see what you are most comfortable with before you move on to Step Two.

# Step two: Use the item to tease him sexually.

Once you’ve decided on the item you want to use as your “bell,” plan and remember to consistently and intentionally use the item to tease him.

It’s as simple as that. Use the item during sex.

#Step three: Use it some more to tease him and get him rock hard.

The next few times you can plan to initiate sex, wear the shoes.

Of if you know there will be a time he is likely to initiate sex, like on a date night or on vacation, remember to wear the shoes or have them handy.

Step Three can last a few weeks or longer, depending on the frequency you have sex.

# Step four: Test his response to see if the teasing trick is working on him or not.

After a few times of using the shoes, test whether he’s begun to associate the item with sex.

Pull the sex shoes out of the closet and mention you are thinking of wearing them. See what he does.

Does his attention perk up? Does he smile or pull you close? Does he begin to flirt, hint, or flat-out ask for sex?

If the answer to any of those is yes, then you know the conditioning is taking hold.

If the answer to the question is no, DO NOT WORRY.

Remember, this technique is one that takes time to develop.

So just continue working Step Three. Every so often, test and see his response to the item outside of sex.

After the conditioning has been cemented in his brain, you can begin to tease and toy with him.

For example, you can simply whisper the word “strappy sandal” and have his penis spring to attention.

Or casually leave the shoes out on the bed when you leave for a girls’ night out, so he sees them while you aren’t there.

If you meet up for a dinner one night after work, show him that you have the shoes on, and watch him squirm in his seat, waiting to get you out of that restaurant and into bed!

Like in my pillow example above, once I knew my girlfriend associated the pillow with a blow job, she could toy with me and tease me by mentioning pillows or touching pillows, and my penis responded immediately every single time.

And I loved that she could render me helplessly aroused with one simple word.

That's it for now.. I will stop here. I hope you loved reading this guide on how to tease a man sexually.

Before I stop. I want to show you something special, something amazing that has the power to boost your confidence as a woman and also take your SEX LIFE to another level.

Quick Warning: While this tutorial video is quite distressing, it will teach you how to make your man scream with pleasure and become sexually addicted to you. If you are interested in having a man completely obsessed with you and only you, then check out the detailed (& explicit!) video tutorial video here.